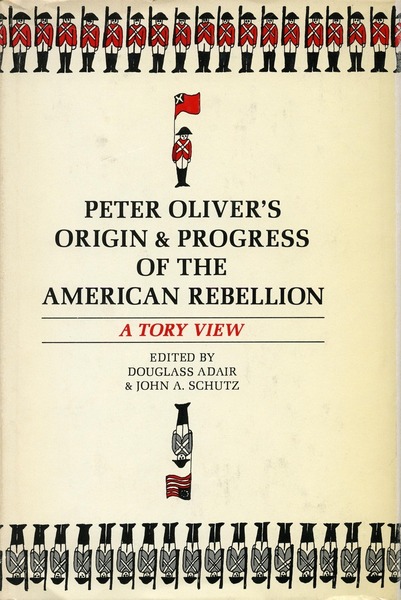 Peter Oliver’s “Origin and Progress of the American Rebellion”
A Tory View
Edited by Douglass Adair and John A. Schutz

One difficulty in writing a balanced history of the American Revolution arises in part from its success as a creator of our nation and our nationalistic sentiment. Unlike the Civil War, unlike the French Revolution, the American Revolution produced no lingering social trauma in the United States—it is a historic event widely applauded by Americans today as both necessary and desirable. But one consequence of this happy unanimity is that the chief losers of the War of Independence—the American Loyalists—have fared badly at the hands of historians. This explains, in part, why the account of the Revolution recorded by self-professed Loyalist and Chief Justice of the Superior Court of Massachusetts, Peter Oliver, has heretofore been so routinely overlooked.

Oliver's manuscript, entitled "The Origins & Progress of the American Rebellion," written in 1781, challenges the motives of the founding fathers, and depicts the revolution as passion, plotting, and violence. His descriptions of the leaders of the patriot party, of their program and motives, are unforgiving, bitter, and inevitably partisan. But it records the impressions of one who had experienced these events, knew most of the combatants intimately, and saw the collapse of the society he had lived in. His history is a very important contemporary account of the origins of the revolution in Massachusetts, and is now presented here in it entirety for the first time.

Douglass Adair is Professor of History at the Claremont Graduate School.

John A. Schutz is Professor of History at the University of Southern California.