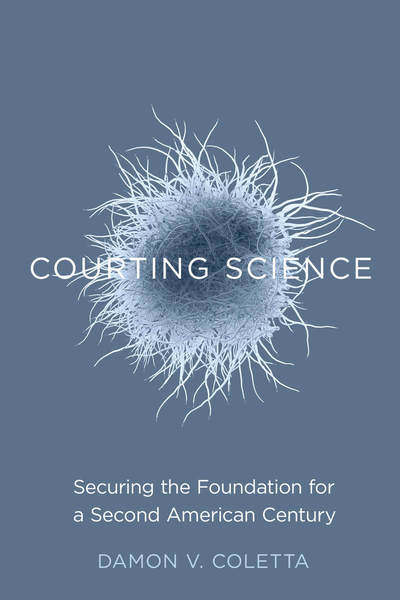 In Courting Science, Damon Coletta offers a novel explanation for the decline of American leadership in world affairs. Whether the American Century ends sooner rather than later may depend on America's capacity for self-reflection and, ultimately, self-restraint when it comes to science, technology, and engineering. Democracy's affinity for advanced technology has to be balanced against scientific research and progress as a global enterprise. In an era of rising challengers to America's lead in the international order and an increasingly globalized civil society, a "Scientific State" has a better chance of extending its dominance. In order to draw closer to this ideal, though, the United States will have to reconsider its grand strategy. It must have a strategy that scrutinizes how tightly it constrains, how narrowly it directs, and how far it trusts American scientists. If given the opportunity, scientists have the potential to lead a second American Century through domestic science and technology policy, international diplomacy, and transnational networks for global governance.

Damon V. Coletta is Professor of Political Science at the United States Air Force Academy. He is Editor of Space and Defense, the journal of the Eisenhower Center for Space and Defense Studies.

"Overall, this unique combination of international relations theory and analysis of science policy enlightens and entertains. At a minimum, readers will have a better appreciation for the dynamics underlying national science policy and global cooperation on scientific issues. Some, hopefully, will find something more: motivation to lobby elected officials to prioritize science both in terms of funding and regarding foreign policy goals and strategies."