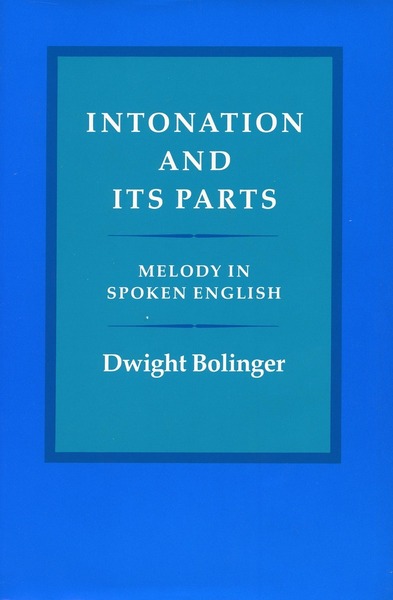 Intonation and Its Parts
Melody in Spoken English
Dwight Bolinger

"It's not what she said, it's the way that she said it," is a complaint we have all heard (or made) some time or another. What does it refer to? It obviously relates to the various forms of wordless communication, but especially to the speaker's use of intonation—the rise and fall of the pitch of the voice—to convey sarcasm or resignation, anger or apprehension, or any of scores of other moods. In this summation of over forty years of investigation and reflection, the author analyzes the nature, variety and utility of intonation, using some 700 examples from everyday English speech.

The work looks at both accent (pitch shift that points up individual words) and overall configurations (melodies that shape the meaning of whole sentences). It shows that most easily understood utterances employ one or another of a surprisingly small stock of basic melodies, and it shows both intonation and visible gesture to be parts of a larger complex that conveys grammatical as well as emotional information.

Though it is one of the major divisions of the science of linguistics, intonation is of great interest to others outside of linguistics—to actors and lawyers who must use the voice to assert, to downplay, or to emote; to English teachers as an essential ingredient of idiomatic speech; to musicians for its many common elements in music theory; and to psychologists and anthropologists as a gauge of emotional tension and a clue to behavior.

Dwight Bolinger is Professor Emeritus of Romance Languages and Literatures at Harvard University.