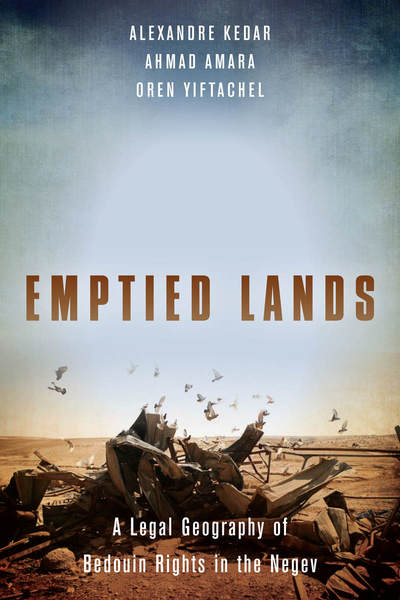 Emptied Lands investigates the protracted legal, planning, and territorial conflict between the settler Israeli state and indigenous Bedouin citizens over traditional lands in southern Israel/Palestine. The authors place this dispute in historical, legal, geographical, and international-comparative perspectives, providing the first legal geographic analysis of the "dead Negev doctrine" used by Israel to dispossess and forcefully displace Bedouin inhabitants in order to Judaize the region. The authors reveal that through manipulative use of Ottoman, British and Israeli laws, the state has constructed its own version ofterra nullius. Yet, the indigenous property and settlement system still functions, creating an ongoing resistance to the Jewish state.Emptied Lands critically examines several key land claims, court rulings, planning policies, and development strategies, offering alternative local, regional, and international routes for justice.

Alexandre Kedar teaches at University of Haifa School of Law and is a co-editor of The Expanding Spaces of Law (Stanford, 2014). He is a co-founder of The Israeli Association for Distributive Justice.

Ahmad Amara is a Polansky Academy Fellow at the Van Leer Jerusalem Institute, a human rights lawyer, and co-editor of Indigenous (In)Justice (Harvard, 2013). In 2005, he co-founded a human rights organization, Karama (Arabic for "Dignity"), in Nazareth.

Oren Yiftachel teaches political geography and urban planning at Ben-Gurion University of the Negev. He authored Ethnocracy: Land and Identity Politics in Israel/Palestine (Penn, 2006), co-edited Indigenous (In)Justice (Harvard, 2013), and was Chair of B'tselem, the Israeli Information Center for Human Rights in the Occupied Territories.

"People are dispossessed not only with guns and bulldozers, but also with legal practices and strategies. Emptied Lands reveals how the painfully named and legally invoked Dead Negev Doctrine facilitates the continued dispossession of Bedouins in the Negev, the most intense and protracted land dispute within Israel. Drawing from decades of activism and scholarship, Kedar, Amara, and Yiftachel provide a powerful challenge to the doctrine, creating space for better forms of legality."

"Three of the best critical scholars of contemporary Palestine have successfully combined legal, geographical, and political analysis into a forensic study of how Israel has weaponized the law against the most vulnerable of all inhabitants of Palestine, the Bedouins. A remarkable multidisciplinary feat, this book provides an essential understanding of settler colonialism."

"This book is particularly valuable on a subject that is as complex as it is almost unresearched—namely, how the state formulates different elements that amalgamate politics with history and law in order to legitimize Bedouin land dispossession. Kedar, Amara, and Yiftachel...are able to identify and explain in their historical and legal context the key elements of the state's policy and the court decisions with regard to the Bedouin land issue."

"[Emptied Lands] confronts us with a direct, scholarly account of one of the main routes to dispossession on which the State of Israel has relied in emptying the Negev of its Palestinian Bedouin residents. This fascinating and well-written book—the result of extensive archival research, verification of sources, and a thorough reading of historical and geographical documents—systematically dismantles the Israeli establishment's claims using a variety of scientific, legal, geographic, planning, and Zionist sources. The uniqueness of the work lies in the presentation of an alternative, geographically based legal property rights study."

"The three authors have done a great service to those who wish to critically appraise the Israeli court position with regard to Bedouin in the Negev, their indigeneity and their claims to autonomy. Knowing the argument put forward to deny their indigeneity, or their rights to the lands of their forefathers, is powerful ammunition for future legal cases, as well as in continuing resistance to being ignored in 'unrecognised villages', or forcibly resettled."