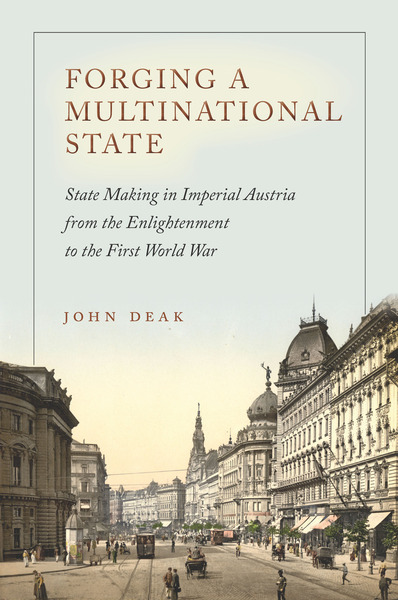 Winner of the 2018 The Karl-von-Vogelsang State Prize for Social-Science History, sponsored by the Austrian Federal Ministry of Science and Research.

The Habsburg Monarchy ruled over approximately one-third of Europe for almost 150 years. Previous books on the Habsburg Empire emphasize its slow decline in the face of the growth of neighboring nation-states. John Deak, instead, argues that the state was not in eternal decline, but actively sought not only to adapt, but also to modernize and build.

Deak has spent years mastering the structure and practices of the Austrian public administration and has immersed himself in the minutiae of its codes, reforms, political maneuverings, and culture. He demonstrates how an early modern empire made up of disparate lands connected solely by the feudal ties of a ruling family was transformed into a relatively unitary, modern, semi-centralized bureaucratic continental empire. This process was only derailed by the state of emergency that accompanied the First World War. Consequently, Deak provides the reader with a new appreciation for the evolving architecture of one of Europe's Great Powers in the long nineteenth century.

John Deak is Assistant Professor of European History at the University of Notre Dame.

"John Deak has produced an excellent study of the Habsburg bureaucracy's state-building project from 1790 to 1914. Based on thorough archival research and deep knowledge of the relevant secondary literature, this ambitious and engagingly written volume is a most welcome addition to the literature on the modernizing Monarchy."

"It is not everyone who can turn bureaucrats into the protagonists of an interesting and readable tale. That is, however, exactly what John Deak accomplishes in [this book]. Each chapter begins with an arresting anecdote that Deak then uses to launch an important analytical intervention into our current understanding of Habsburg history."

"John Deak's book makes a major contribution to a growing body of revisionist scholarship on Imperial Austria during the long nineteenth century...Deak offers here a powerful analysis of the results of the continuing processes of state building in Imperial Austria and the government's dynamic relationship with a changing society, which should be considered by anyone interested in comparative processes of political and governmental development in nineteenth-century Western societies."

"Deak's book is a refreshing alternative to an all-too-self-assuring myth of the inevitable decline of the Habsburg dynasty."

"John Deak's meticulous history of the Austrian bureaucracy from the late eighteenth century until the outbreak of the Great War in 1914 offers a compelling counter-narrative to the standard account of the Habsburg Empire's decline and fall....Deak's book will be of enduring interest to specialists in imperial Austrian history and the history of bureaucracy. Moreover, Deak crafts an engaging historical account with bureaucrats as the protagonists, which is no mean feat. Forging provides a welcome corrective to standard interpretations of the misunderstood Austrian Empire."

"Deak's book will be essential reading for any Habsburg or nineteenth-century European scholar, and it encourages us to confront the ways we have misunderstood the Habsburg experience in the decades before the war."

In Forging a Multinational State, Deak courageously presents a coherent narrative history of a challenging subject....Given the sheer complexity and size of his topic, Deak's achievement is remarkable. He argues forcefully in clear, often stylish language for a different appreciation of the accomplishments of the Habsburg monarchy and particularly of the bureaucracy."