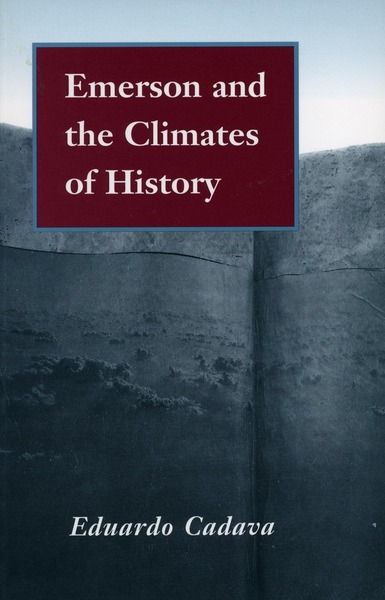 Emerson and the Climates of History
Eduardo Cadava

This book brings together a wide range of materials from history, religion, philosophy, horticulture, and meteorology to argue that Emerson articulates his conception of history through the language of the weather.

Focusing on Emerson's persistent use of climatic and meteorological metaphors, the book demonstrates that Emerson's reflections on the weather are inseparable from his preoccupation with the central historical and political issues of his day. The author suggests that Emerson's writings may be read as both symptomatic and critical of the governing rhetorics through which Americans of his day thought about the most important contemporary issues, and that what has often been seen as Emerson's retreat from the arena of history into the domain of spirit is in fact an effort to re-treat or rethink the nature of history in terms of questions of representation.

What distinguishes this book from the work of other critics who are reassessing Emerson's relation to history is its attempt to think through the way in which the figures of Emerson's rhetoric—figures (like frost, snow, the auroras, and nature in general) which often seem to have nothing to do with either history or politics—are themselves traversed by the conflictual histories of slavery, race, destiny, revolution, and the meaning of America. It differs, that is, in proposing a textual model for reading Emerson that measures his engagement with changing historical and political relations in terms of the way he works to revise the language he inherits. There can be no reading of Emerson, the author suggests, that does not trace the movement of his figures and tropes as they become something else, as they open onto questions of history.

Eduardo Cadava is Assistant Professor of English at Princeton University. He is the author of Words of Light: Theses on the Photography of History.

“Beautifully written and brilliantly conceived and organized, this is the most illuminating and original work on Emerson that I have read. Cadava works to historicize Emerson by tracing the thematic and rhetorical connections between his writing and the literary, theological, and political texts of his period, and, in so doing, hopes to establish a model for reading the relation between literature and history. In my opinion, he is completely successful.”—Edgar A. Dryden, University of Arizona