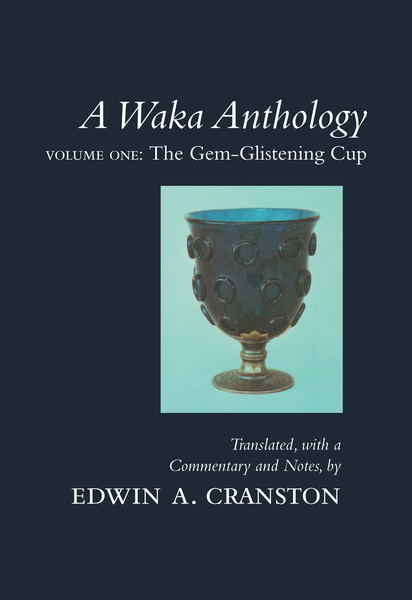 A Waka Anthology
Volume One: The Gem-Glistening Cup
Translated, with a Commentary and Notes, by Edwin A. Cranston

Winner of the 1994 Japan-U.S. Friendship Commission Prizes for the Translation of Japanese Literature, sponsored by Donald Keene Center of Japanese Culture at Columbia University.

The Gem-Glistening Cup is the second volume of Edwin Cranston's monumental Waka Anthology which carries the story of waka, the classical tradition of Japanese poetry, from its beginnings in ancient song to the sixteenth century. The present volume, which contains almost 1,600 songs and poems, covers the period from the earliest times to 784, and includes many of the finest works in the literatures as well as providing evocative glimpses of the spirit and folkways of early Japanese civilization.

The texts drawn upon for the poems are the ancient chronicles Kojiki, Nihonshoki, and Shoku Nihongi; the fudoki, a set of eighth-century local gazetteers; Man'yoshu, the massive eighth-century compendium of early poetry (about one fourth of that work is included); and the Bussokuseki poems carved on a stone tablet at a temple in Nara. All poems are presented in facing romanization and translation.

Edwin A. Cranston is Professor of Japanese Literature at Harvard University.

"Monumental in size and extraordinary in quality. . . . As a translator, Cranston is unexcelled, both in the uncompromising accuracy of his readings and in his sense of the weight and music of English words."

"A review of The Gem-glistening Cup is almost superfluous. It is literally without peer. . . . It is a monument that will dominate the field of Japanese literary studies in English for the foreseeable future and beyond. . . . Cranston's translations are as good as one could expect from his excellent versions of the Izumi Shikibu Diary. . . . This will be the foundation of many courses in years to come."

"Cranston is one of the finest translators of classical Japanese. . . . A Gem-glistening Cup makes an invaluable contribution for students of Japanese literature."