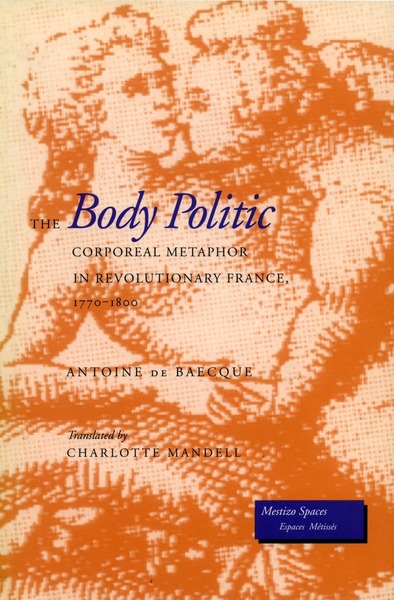 This is a remarkable history of the French Revolution told through the study of images of the body as they appeared in the popular literature of the time, showing how these images were at the very center of the metaphoric language used to describe the revolution in progress.

The author draws upon some 2,000 texts, pamphlets, announcements, opinions, accounts, treatises, and journals to exhume the textual reality of the Revolution, the body of its history. The deployment of bodily images—the degeneracy of the nobility, the impotence of the king, the herculean strength of the citizenry, the goddess of politics appearing naked like Truth, the bleeding wounds of the Republican martyrs—allowed political society to represent itself at a pivotal moment in its history.

The introductory chapter studies the symbolic defeat of the king's body and the transfer of virility to the Republican body. Later chapters examine the new patriotic body as described in medical terms; paintings by David that show the revolutionary hero as "political body"; the Revolutionary subject conceived in terms of regeneration; its opposite, the aristocratic body, conceived as monstrous; and the bestial images projected onto Marie Antoinette.

Antoine de Baecque is Professor at the University of Saint Quentin in Yvelynes, France.