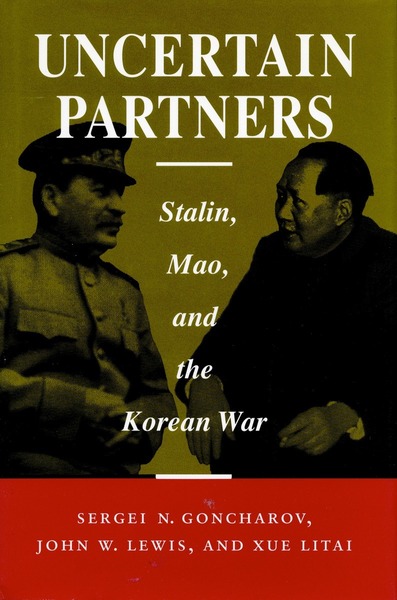 Uncertain partners tells for the first time the inside story of the creation of the Sino-Soviet alliance and the origins of the Korean War. Using major new documentary sources, including cables and letters between Mao Zedong and Stalin, and interviews with key Russian, Chinese, and Korean participants, the book focuses on the domestic and foreign policy decision-making in all three countries from 1945 through October 1950.

The authors examine the complex relations between Stalin, Chiang Kai-shek, and Mao during the last year of the Chinese civil war and the emergence of the Cold War. They show how the interplay of perceptions, national security policies, and personalities shaped those relations and were used by the North Korean leader Kim Il Sung to win backing for the invasion of South Korea. The authors also examine the Sino-Soviet alliance, drawing on hitherto unknown secret protocols and understandings and the records of high-level planning that led to the invasion and to the Chinese intervention in Korea.

Sergei Goncharov, formerly with the Far Eastern Institute at the Academy of Sciences, Moscow, is now an advisor to Boris Yeltsin and a member of the Russian Ministry of Foreign Affairs.

John W. Lewis is Haas Professor of Chinese Politics at Stanford University. Xue Litai is Research Associate at the Center for International Security and Arms Control at Stanford.

"A remarkable tripartite collaboration. . . . A new and highly revealing account of how the Korean War began, based on a careful comparison of Chinese, Soviet, and even North Korean sources. The authors' achievement, from a historian's perspective, is roughly the equivalent of making a first flight around the hidden side of the moon. . . . An exemplary standard for the 'new' Cold War history."

"A fascinating and exciting book. Every expert on Soviet and Chinese foreign policy and every student of international relations and the Cold War will have to read it. I am awed by the materials that have been put together in this book; it is international collaboration at its very best."

"This title, the first using newly available resources from China and Russia, represents the opening of a new era in the study of Sino-Soviet relations and their effect on international politics. The credentials of the authors are the highest."

"This magisterial work provides the missing dimension of the Korean war—how policy was made on the communist side. Making use of previously unavailable Chinese and Soviet sources . . . this is likely to become the standard work on the subject."--John Merrill, George Washington University.