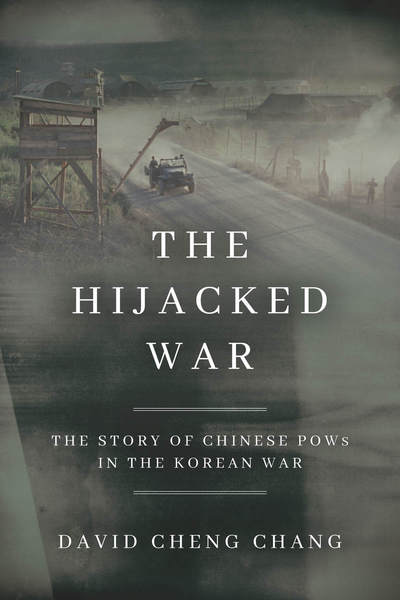 "Chang's exceptionally vivid prisoner's-eye account, based on camp archives and interviews with ex-POWS, leads him to condemn the key U.S. policymakers, including President Harry Truman and Secretary of State Dean Acheson, for their 'arrogance, ignorance, and negligence.'"

"David Cheng Chang fills a void in the literature on the Korean War with this important book describing the experiences of Chinese prisoners of war (POWs) during the conflict and assessing the impact of their incarceration and release... Chang delivers on his pledge to answer the questions of who these POWs were, why they chose to return home or not, and whether their choice was voluntary."

"The winner of the Korean War, ironically, turns out to be Chiang Kai-shek...The Hijacked War tells the violent and tragic story of Chiang's unacknowledged victory in Korea."

"The Hijacked War is a welcome and important intervention into Korean War historiography. Chang's focus on the lived experiences of those involved in POW discussions and camps suggests the ways that local stories can reorient our understanding of events, particularly a conflict that is often told in terms of high politics and military strategy."

"Besides being thus far the most in-depth exploration of Chinese POWs, The Hijacked War will be valuable to scholars studying the Korean War frontline and infiltration campaigns....Based on solid scholarship, Chang's POW biographies offer unique perspectives."

"An ambitious China-centric work that nonetheless wonderfully captures the ambiguity and confusion associated with the breakup of the Japanese Empire and the related uncertainty of the two Koreas, The Hijacked War holds interest for a range of fields, reaching out to scholars of Northeast Asia, along with more nation-oriented subdisciplines of East Asian studies."

"David Cheng Chang offers an intriguing alternative explanation for the skewed anti-repatriation decision on the part of Chinese POWs and its impact on the Korean War....Hijacked War is no doubt an excellent contribution to Korean War POW studies. Those interested in the Korean War and POWs will find it very inspiring and worth reading."

"This well-written book poses some tough questions regarding the Chinese prisoner repatriation issue in the Korean War, a topic deserving of further scholarly examination."

"By moving beyond diplomatic history, Chang closes a major gap in the historiography on Chinese intervention in Korea by painstakingly unpacking the complex psyches of the Chinese POWs.

"With Chang's historical account, we can finally understand the myriad factors that led to Chinese POWs defecting from China to Taiwan at a two-to-one ratio (a stunning ratio compared to 7,826 non-repatriates and 75,823 repatriates among the North Korean POWs). In this twinned flipping of the script, Chang recasts Chinese POWs as the central actors of the Korean War to argue that 'the brightest minds of the mightiest power on earth [United States] were taken captive by the [Chinese] captives' (12)."

"In telling the stories of Chinese POWs, Chang's stress on social history points to other topics in Chinese military history, such as recruitment, indoctrination, political control, awards and punishments, and other aspects of prisoner policy. Personal stories bring fresh insights into Communist POWs' motivations and perceptions. In their own words, they provide compelling firsthand accounts of their war experiences in Korea as well as their family lives before and after the war. Their stories deepen our understanding of the war."