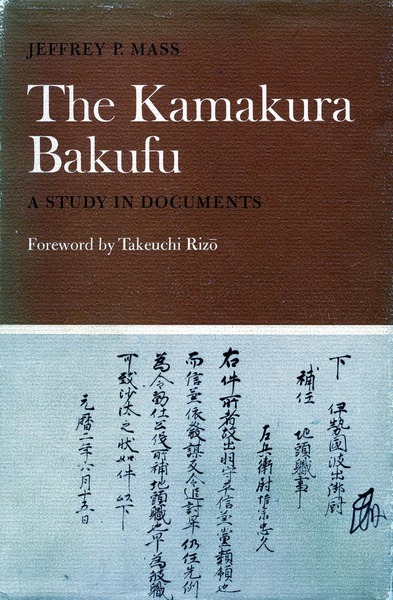 The Kamakura Bakufu
A Study in Documents
Jeffrey P. Mass

"The essential guide for anyone undertaking the study of medieval Japan."—From the Foreword by Takeuchi Rizō. This pioneering guide to the content and use of documents in the study of medieval Japan has two parts. Part I consists of translations, arranged by topic with annotation and running commentary, of 177 edicts and land records from the time of Japan's Kamakura shogunate (1180-1333). The documents illustrate the patterns of authority, bureaucracy, and justice that emerged under Japan's first warrior government, with emphasis on the appointment of local officials and the curbing of local ambitions. The translations are offered for the historical record and as a demonstration of how medieval sources can be used by historians.

Part II is an annotated and geographically classified Bibliography of nearly 600 books and articles in Japanese that present the texts of official documents (komonjo) issued from earliest times to 1600. No comparable bibliography exists even in Japanese.

The work includes explanatory introductions, a glossary of terms and phrases used in the documents, alphabetical and chronological indexes of the documents and sources, and photographs of representative original documents, with comments on format and style.