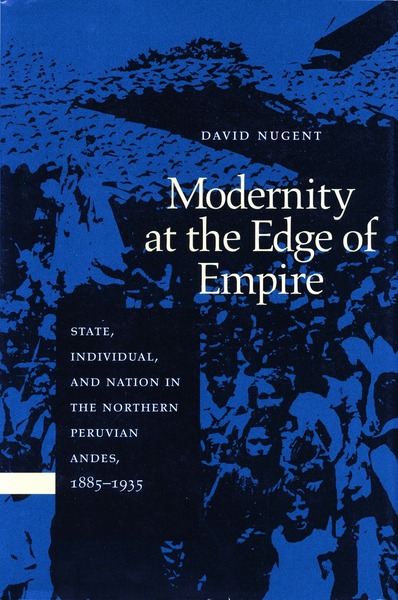 Modernity at the Edge of Empire
State, Individual, and Nation in the Northern Peruvian Andes, 1885-1935
David Nugent

Challenging much received wisdom about nation-states—how they form, what sustains them, why they fail—this study of subaltern social groups in the Chachapoyas region of Peru analyzes the emergence of the modern nation-state "from below." By approaching nation-state formation from the perspective of the subaltern, the book offers a critique of scholarship that sees coercion and the imposition of social and cultural forms as the core of nation-state expansion. This “coercive” view bears virtually no relation to the complex transformations in power, culture, and economy that resulted in the consolidation of national control in the Chachapoyas region.

In Chachapoyas, subaltern social groups had long been subject to the abuses of a social order based on principles of aristocratic sovereignty. In the 1920's, these popular forces mobilized around an alternative vision of community that promised to deliver them from their aristocratic overlords—a national community, based on modernity and popular sovereignty. In 1930, the subaltern challenged the elite in an armed uprising, seized control of regional affairs, and established a new form of public culture. Because these newly ascendant popular groups regarded the nation-state as a powerful force for emancipation, they made national values and state institutions an integral part of public culture. In the process, they brought the nation-state into being in Chachapoyas.