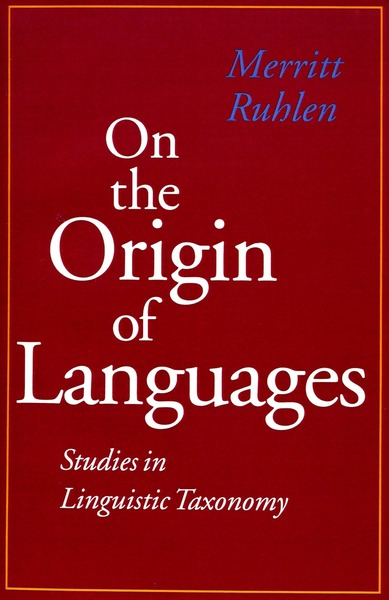 On the Origin of Languages
Studies in Linguistic Taxonomy
Merritt Ruhlen

This book presents a series of illuminating studies which conclusively demonstrates that the prevailing conception of historical linguistics is deeply flawed. Most linguists today believe that there is no good evidence that the Indo-European family of languages is related to any other language family, or even any other language. In like manner, the New World is deemed to contain hundreds of language families, among which there are no apparent links. Furthermore, it is claimed, there are no known connections between the languages of the Old World and those of the Americas. And finally, the strongest belief of all is that there is no trace of genetic affinity—nor could there be—among the world’s language families.

The author argues that all of these firmly entrenched—and vigorously defended—beliefs are false, that they are myths propagated by a small group of scholars who have failed to understand the true basis of genetic affinity. Twentieth-century Indo-Europeanists (though not their nineteenth-century forebears) have confused the issue of genetic affinity, which derives from classification, with such traditional concerns of historical linguistics as reconstruction and sound correspondences. Once it is recognized that taxonomy, or classification, must precede these traditional concerns, the apparent conflict between the traditional view and that of Joseph Greenberg and his followers is seen to be illusory. And finally, a comparison of all the world’s languages in this new perspective leaves little doubt that all extant human languages share a common origin.