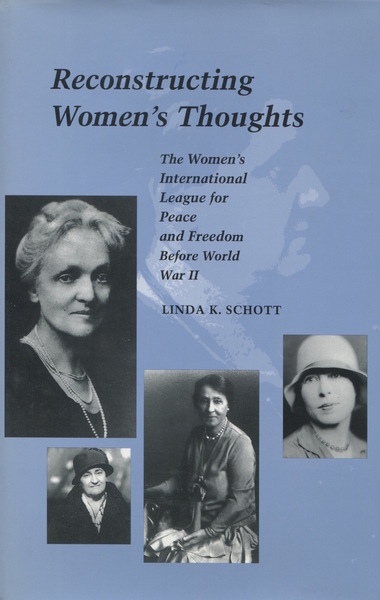 A study of the women who led the United States section of the Women's International League for Peace and Freedom in the interwar years, this book argues that the ideas of these women—the importance of nurturing, nonviolence, feminism, and a careful balancing of people's differences with their common humanity—constitute an important addition to our understanding of the intellectual heritage of the United States.

Most of these women were well educated and prominent in their chosen fields: they included Jane Addams and Emily Greene Balch, the only two United States women to win Nobel Prizes for Peace; Jeannette Rankin, the first woman elected to the U.S. Congress; and Dorothy Detzer, the woman who prompted the investigation of the munitions industry in the 1930's. The ideas of these women were not usually expressed in forms conventionally studied by intellectual historians. On the whole, their ideas must be teased out of organizational records, statements of principle and policy, and personal correspondence. When combined with an understanding of the personal backgrounds of the WIL leaders and placed in the context of early-twentieth-century America, these documents tell us what these women thought was important and why.

The ideas of the WIL leaders are also analyzed in the context of the intellectual themes of Victorianism and modernism. Our understanding of these themes has been based largely on the work of privileged European and American men, and the ideas of women often fit uncomfortably into these traditional categories. A reconstruction of the ideas of the WIL leaders suggests that historians have overlooked an important, alternative intellectual tradition in the United States. To understand and appreciate women's thoughts, we must dissolve the old constructs and let new, multifaceted ones replace them.

Linda K. Schott is Associate Professor of History and American Studies, and Director of the Center for the Study of Women and Gender, at the University of Texas at San Antonio.