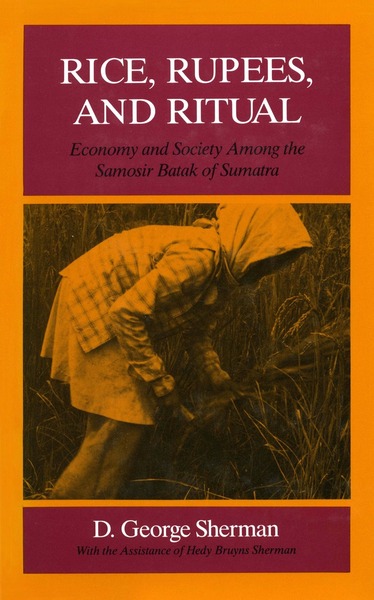 Rice, Rupees, and Ritual
Economy and Society Among the Samosir Batak of Sumatra
D. George Sherman

In this ethnographic study of the small mountain village of Huta Ginjang in the Samosir area of northern Sumatra, the author pursues three main themes: the role of rice in the Batak economy of feasting, and the cultural ecology of dry- and flooded-field rice-growing. Two important questions emerge: How did the social and economic changes resulting from Dutch colonization - particularly the adoption of money as a medium of exchange - affect Samosir Batak culture/ Have the values that largely shape the local economy been fundamentally altered by the effects of colonization and subsequent Japanese and Indonesian administrations? After introductory chapters present the environmental and historical background of the Samosir region, the author describes the socio-cultural base on which its agricultural economy rests: indigenous political and religious institutions, concepts of patrilineal descent and marriage alliance, and, most importantly, the ideology of the feasting system. He then examines in detail and in comparative perspective the agricultural practices of Huta Ginjang, and also deals more generally with the economic relations and institutions of the villagers, notably marketing, credit, and cooperative endeavours. Since the key production units are nuclear families, the author analyzes the development of households and the organization of labor in cultivating crops. He then turns to the distribution of livestock and land by both ritual and nonritual means. The book is illustrated with photographs, line drawings, and maps.