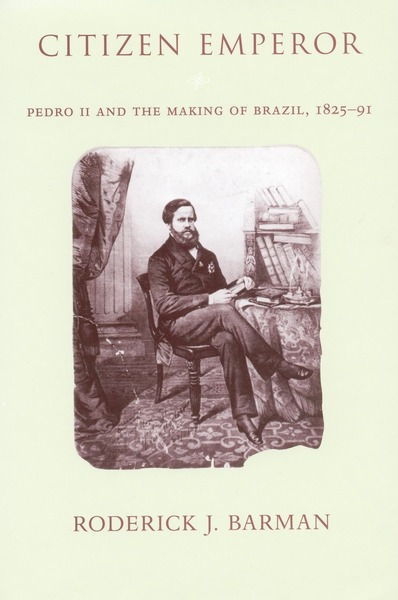 Winner of the 2001 Warren Dean Prize, sponsored by the Conference on Latin American History.

In the history of post-colonial Latin America no person has held power so firmly and for so long as did Pedro II as emperor of Brazil. Called to the throne in 1840 at the age of 14, Pedro II devoted himself for the next half century to transforming Brazil into a functioning nation-state, applying “all my forces and all my devotion to assuring the progress and prosperity of my people.” This is the first full-length biography in 60 years, and the first in any language to make close use of Pedro II’s diaries and family papers.

Resourceful, patient, cautious, and above all persevering, Pedro II acquired undisputed control of public affairs and was indispensable in establishing Brazil’s viability as a nation. By his personal character, behavior, and interests, he created a model of citizenship that commanded acceptance at home and respect abroad. A friend of Longfellow, Emerson, and Oliver Wendell Holmes, he was the first foreign head of state to visit the United States.

By the 1880s, the rising generation had so internalized the model of Pedro II that it greatly resembled him in outlook and culture. Ironically, his success was such that the ruling circles took Brazil’s existence as a nation for granted and viewed him as old-fashioned and irrelevant to the nation’s needs. In effect, he had made himself redundant. Unable to change his ways of ruling, weakened by illness, and increasingly marginal to public affairs, he was overthrown by a military coup in 1889. Exiled to Europe, he died in Paris two years later.

This volume reveals how the political and the personal intertwined to make Pedro II the person he was. Many facets of his character appear innate—his great energy and his love of books and learning, for example—but his personality was also shaped by a privileged background, painful childhood experiences, and convoluted relationships with his parents, siblings, wife, and children. He was remarkably self-centered, with a distrust of intimacy that left him emotionally deprived. He worked alone, and his principal advisors were never human beings but books.

A man of monumental restraint and iron self-discipline, Pedro II took great care in speech and writing to reveal little of his inner self. These defenses once penetrated, as in this book, we encounter a complex personality who simultaneously compels sympathy, exasperation, and respect.

"Likely to become a cornerstone in Brazilian historiography . . . Citizen Emperor is an eloquently written, evenhanded and full-bodied treatment of Pedro II, the man, the monarch, and his times. . . . Comprehensively researched and documented, this work is liberally endowed with revealing quotations from family, friends, observers, and the emperor himself."

"This well-written major work is thoroughly researched, and it covers Dom Pedro's life in great detail. He will not need another biographer."

"Barman, in this scholarly biography, meticulously researched and thoughtfully analyzed, rescues Pedro II from many of the myths that have gathered around his rule. . . . He has sought to restore the Emperor to his due place in Brazil's history and to document his policy toward the great national issues."

"This is the best biography in English of the mand who reigned over Brazil from 1840 to 1889. . . . This beautifully-written biography, with a solid empirical basis, is indespensable for the understanding of Pedro II and the micro-politics of his reign."

"Barman has written the essential biography of Pedro II, a marvelous book that explains better than any other how the Brazillian monarchy lasted as long as it did in a hemisphere hostile to royalty, and why it abruptly collapsed in a cloud of public apathy. . . . The work is carefully crafted and stylishly written; it approaches perfection in the biographer's art."

"An absorbing and highly-readable analysis that should appeal to students and specialists alike. . . . Barman's ability to blend the personal, political, and institutional makes this political biography stand out. Its documentary richness, depth, and engaging style set a high standard indeed."

"This definitive portrait will no doubt remain the standard work on Pedro II for a long time to come."

"Barman's Citizen Emperor is a masterful portrait of Pedro II that provides a richly documented study of elites, high politics, and the Court in nineteenth-century Brazil."