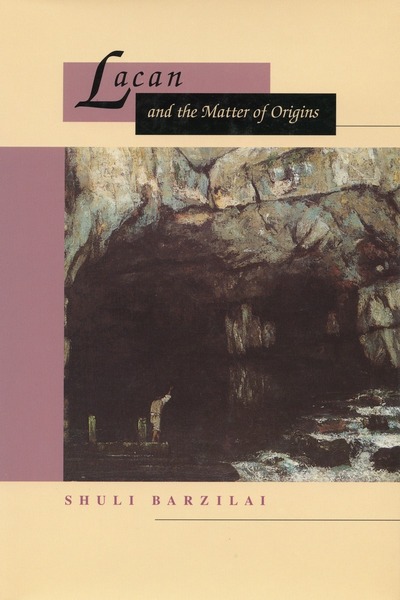 Lacan and the Matter of Origins
Shuli Barzilai

Lacan and the Matter of Origins traces the development of Lacan's thinking about the role of the mother in psychical formation. It examines the conceptual struggle throughout his work over issues of maternal agency in relation to the constitution of human subjectivity, and the theoretical, historical, and autobiographical reasons for this struggle. Lacan is widely held to emphasize the paternal dimension of human subjectivity and the phallic signifier. This book demonstrates that the mother occupies a crucial position in the Lacanian project, even if the maternal relation is not systematically theorized. The maternal figure appears as a Cheshire Cat who fades away and reappears at different times.

The book traces the major shifts in Lacan's understanding of the maternal within an intertextual framework that includes Augustine, Klein, Kojève, and Rank. Pursuing in Lacan's writings the sometimes contradictory or unassimilable functions of the mother, the book closely tracks his variations on and departures from the Freudian definition of such concepts as primary identification, narcissism, castration, deferred action, and the death drive. Lacan's major contribution to twentieth-century thought emerges here in the context of his ostensibly loyal yet revisionist stance toward Freud as his major precursor in the psychoanalytic field.

For those reading Lacan's often recondite work for the first time, Lacan and the Matter of Origins provides an accessible point of entry, with its clear explication of key terms together with their historical and conceptual background. For readers familiar with Lacanian theory, the book offers a reconceptualization of the evolution of his teachings from literary-critical, cultural, and biographical perspectives; it also presents a new approach to Lacan through the interplay of influences integral to the formation of his revisionary thought.

Shuli Barzilai is Associate Professor of English at the Hebrew University of Jerusalem. She is the co-editor (with Shlomith Rimmon-Kennan and Leona Toker) of Reading Texts/Rereading Critical Presuppositions.

“This outstanding book represents an entirely new approach to Lacan, treating the historical development in his work of theoretical shifts in the understanding of the mother in psychic development. I think it will be received as one of the most important introductions to and commentaries on Lacan in English.”—Daniel Boyarin, University of California, Berkeley