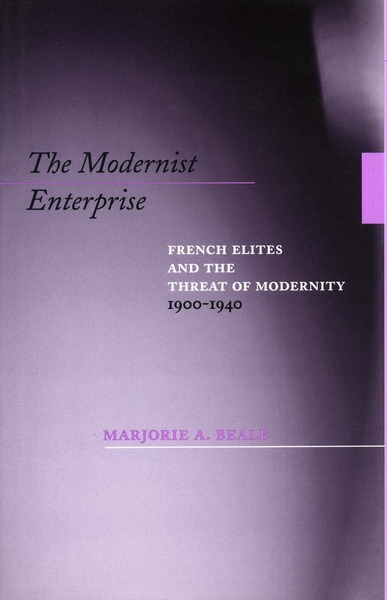 The Modernist Enterprise
French Elites and the Threat of Modernity, 1900-1940
Marjorie A. Beale

For the tradition-bound French elites of pre-World War I and the interwar period, modernity presented itself as a series of questions about France’s place in a newly competitive industrial world and about their positions as the leaders and managers of a mass society. What was the optimal form of governance in a mass democracy? What would be the new roles of elites? How could public opinion best be shaped and regulated? And, above all, how could France preserve its cultural identity against an onslaught of foreign influences?

This book differs from much of the existing literature of modernity in its attention to a variety of individuals who are not generally recognized as major intellectual figures in their own right, or even as notable representatives of important scientific, philosophical, or aesthetic tendencies. Instead, the author deals with the ways ideas were transmitted within the French elite, and how they were transformed to suit the needs of their users once they were taken up in settings outside the immediate precincts of official high culture and the inner circle of the Parisian avant-garde.

The book analyzes the elites’ response to a series of challenges to the old order: the establishment of mass democracy, the new role of workers and the middle classes in shaping public opinion, burgeoning technological possibilities, and, most importantly, the rise of American-style consumer capitalism. The author shows how business and commercial elites tried simultaneously to appropriate and divert these new forces, balancing tradition with a cautious acceptance of various elements of modernity. The author explores this terrain by focusing on the changing character of advertising, the evolution of the French press, the growth of scientific management, the role of the Social Catholic movement in opening up different kinds and channels of mass communication, and the development of ideas of state planning and industrial rationalization.

Marjorie A. Beale is Assistant Professor of History at the University of California, Irvine.

"Beale's work is definitely a major contribution to a fuler understanding of this dynamic period."

"The Modernist Enterprise offers a fascinating glimpse into the response of French elites to political instability and widespread cultural and technological change. It will be most accessible to scholars of modern France."

"Given the real accomplishments of this study, especially its illuminating presentation of the connections between science, elites, and modernity, it can be hoped that the author will continue to examine and develop her grand thesis about tradition and modernity. This is a potentially rewarding historical approach."