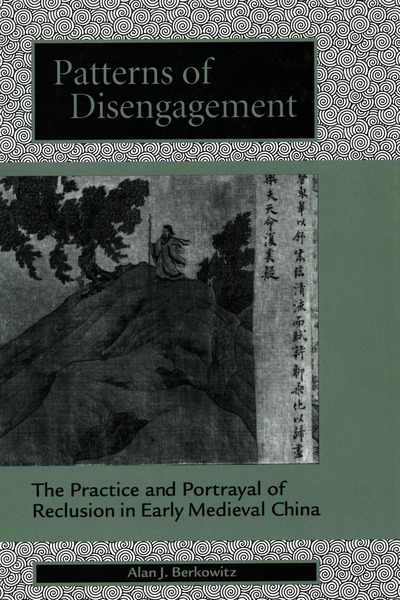 Patterns of Disengagement
The Practice and Portrayal of Reclusion in Early Medieval China
Alan J. Berkowitz

While the customary path to achievement in traditional China was through service to the state, from the earliest times certain individuals had been acclaimed for repudiating an official career. This book traces the formulation and portrayal of the practice of reclusion in China from the earliest times through the sixth century, by which time reclusion had taken on its enduring character.

Those men who decided to withhold their service to state governance fit the dictum from the Book of Changes of a man who "does not serve a king or lord; he elevates in priority his own affairs." This characterization came to serve as a byword of individual and voluntary withdrawal, the image of the man whose lofty resolve could not be humbled for service to a temporal ruler. Men who eschewed official appointments in favor of pursuing their own personal ideals were known by such appellations as "hidden men" (yinshi), "disengaged persons" (yimin), "high-minded men" (gaoshi), and "scholars-at-home" (chushi).

What distinguished these men was a particular strength of character that underlay their conduct: they received approbation for maintaining their resolve, their mettle, their integrity, and their moral and personal values in the face of adversity, threat, or temptation. This book reveals that those who opted for a life of reclusion had a variety of motivations for their decisions and conducted widely divergent ways of life. The lives of these men epitomize the distinctive nature of substantive reclusion, differentiating them from those of the intelligentsia who, on occasion, voiced their desire for disengagement or for retreat, but who nevertheless found or retained their places in government office. Throughout, the author places the recluse and reclusion within the social, political, intellectual, religious, and literary contexts of the times.

"Berkowitz's deep commitment to this fascinating topic is demonstrated by his many excursions to hermitage sites mentioned in his texts and by his comprehensive scholarship. Patterns of Disengagement makes a substantial contribution to the field, and will undoubtedly long remain the definitive treatment of reclusion in early medieval China."

"The book's inclusion of so many Chinese characters in the character list and in the large number of bibliographical entries makes it exceptional."

"This book is a scholarly joy. . . . [Berkowitz's] writing is clear and felicitous. Anyone with an interest in the subject can take pleasure in it and find an occasional flower."

"Students of early and early- medieval China and the Chinese tradition in general should all look upon this work as both an insightful and informative reference and a model of outstanding scholarship."

"Anyone interested in the politics, society, and culture of early medieval China, and more specifically in the tension, experienced by countless generations of Chinese literati, between government service and private pursuits, will benefit greatly from Pattners of Disengagement.—Journal of Chinese Religions

"...Berkowitz has provided us with an engaging study of an important and complex cultural topos, one that will be consulted with profit for years to come."