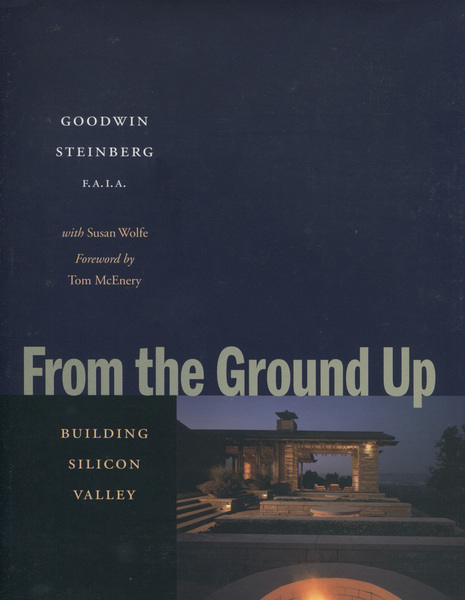 Architect Goodwin Steinberg presents an insider’s view of the development of Silicon Valley—what went right, what went wrong, and how conditions conspired to create the high technology capital of the world. Enlivened by anecdotal brushes with Silicon Valley’s influential and famous, this is the richly illustrated (including 69 color illustrations) personal story of a man whose fifty-year career—and thousands of architectural projects—helped transform an area of farms and ranches known as The Valley of Heart’s Delight to the economic engine named Silicon Valley.

But his story is more than buildings and money and their interplay. As a citizen he has been deeply involved in regional planning, measures to minimize urban sprawl, and ordinances to limit development in the hills above the Valley. As impressive as his work on buildings, one of his proudest achievements was serving as citizen advisor to the creation of Guadalupe River Park, a long ribbon of watery green, with walks and public spaces, in the heart of San Jose, a project as challenging as it is spectacular.

With Steinberg as your guide, this behind-the-scenes look at the politics and personalities of the development of a region is as entertaining as it is informative. His contributions are inseparable from the community, from the mango-colored Tech Museum of Innovation and the Santa Clara County Courthouse, restored to its 1890 historic grandeur, to the hard-won Children’s Shelter and many parts of the campus of Stanford University. All Steinberg’s work testifies to his interest in and talent for beautiful lines and public spaces, allowing people to explore and enjoy their surroundings.

Goodwin Steinberg is the founder of the architectural firm The Steinberg Group. Susan Wolfe is a noted writer and editor.

“This is an intelligent and sensitive account of the urban development of Silicon Valley by someone who was both a concerned citizen and a significant player. Indeed, the very essence of the book is the intertwining of the growth of the region and Steinberg’s various architectural commissions, which run the gamut of what an architect can do to help mold and actualize the life of a region.”—Frederic Stout, Stanford University