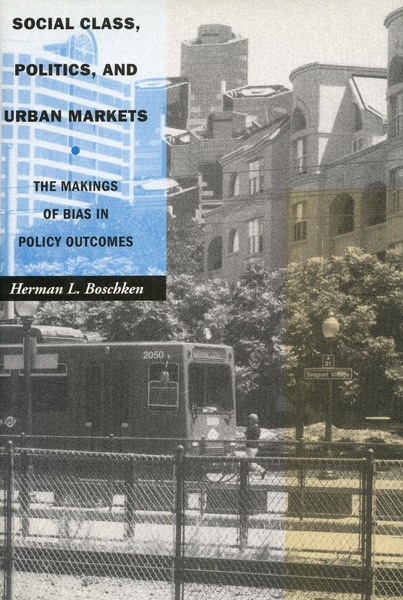 This book is about the policymaking of public agencies in large American cities. Based on a decade of research, it studies urban mass transit in terms of the factors that bias the industry’s policy outcomes to benefit one public or another. Why is there a great variance of outcomes among agencies? What are the important taproots of bias in policymaking? How does the pattern of outcomes correspond to the American mosaic of public interests?

The book’s second—broader and more important—purpose is to demonstrate the value of social science theory in making sense of urban processes and the responsiveness of governmental policymaking in a plural society. The book analyzes the applicability of six rival theses—derived from political science, economics, administrative theory, sociology, social psychology, and urban planning—to understanding the forces that mold policymaking in American metropolitan areas.

The book employs methods of rigorous quantitative analysis, such as regression, factor, and path techniques to examine 42 transit agencies operating in urban areas with populations of at least 500,000. Focusing on the question of bias in an agency’s policies, the author devises an imaginative method for comparing different kinds of policy outcomes in a neutral light. The model, “Multiple Simultaneous Outcome Indices,” allows the analyst to observe differences in emphasis of one perspective relative to another.

How and why do urban agencies differ in the emphases of their policy outcomes? At the root of the answers is globalization, but the author argues that certain local influences within an urban setting exert a more direct effect on policy outcomes. These influences include socioeconomic status, wealth and racial poverty, intergovernmental relationships, market competition between automobiles and transit, and the way cities are laid out (including the effects of sprawl). In the end, the book reveals the most significant influence to be the cultural phenomenon of the American upper middle class, which represents “the good life” and is associated with symbolically appealing technologies and the nuisance of urban roadway congestion.

Herman L. Boschken is Professor of Management and Policy at San Jose State University. He is the author, most recently, of Strategic Design and Organizational Change.

"This impressive book poses important questions about policy bias in a plural society, and shifts focus from a simple notion of public accountability to a more complex understanding based on the view that multiple channels of causation must be examined, especially in a policy area like urban transportation."

"Systematic and precise, Boschken's study makes an important contribution to how public agencies are conceived and evaluated."