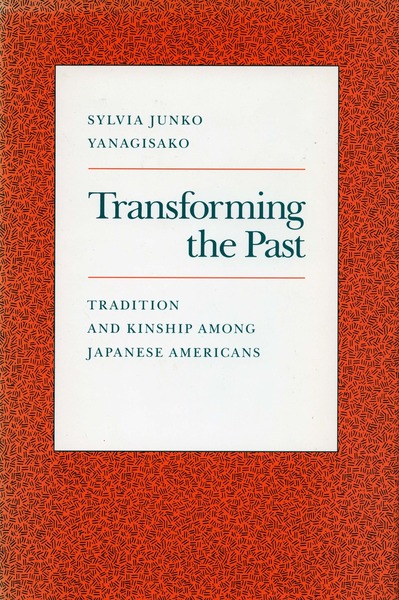 This book is at once a cultural history of Japanese American kinship and a contribution to the study of the contemporary kinship system of the United States. It brings to the analysis of American kinship a theoretical perspective that attends to the historically situated, symbolic processes through which people interpret and thereby transform their kinship relations. By examining kinship change among Japanese Americans, I elucidate a particular case of a general process I take as having been central to the development of contemporary American kinship. For, while Japanese Americans have a unique and rich cultural heritage and a distinctive and troubled social history, the process of kinship change they have undergone since the turn of the century has been shared by many other Americans.

I begin with the premise that kinship relations are structured by symbolic relations and serve symbolic functions as well as social ones. It follows from this that kinship change involves symbolic processes, and that a study of it must attend to the manner in which relations among symbols, meanings, and actions have shaped relations among people. My second premise is that we can comprehend the system of symbols and meanings structuring people's kinship relations in the present only if we know their kinship relations in the past. If symbolic systems help people answer the questions and cope with the problems of meaning they confront in their everyday lives, symbolic analysis can only be enriched by a knowledge of the social history that has given rise to these questions and problems. Conversely, we can comprehend that social history only if we comprehend the system of symbols and meanings through which people interpret and thereby transform the past.

In this study I treat the oral kinship autobiographies I elicited from first- and second-generation Japanese Americans in Seattle, Washington, both as cultural tales and as accounts with a good degree of historical veracity. Because people's recollections of the past are reasonably accurate and do not obliterate facts so much as reinterpret them, they can be mined to reconstruct a social history of events and actions. At the same time they can be used, along with what people say about the present, as material for a symbolic analysis.

Unlike most Japanese Americans, and most of those who have studied them, I do not uncritically assume a timeless past of "Japanese tradition" in which stem-family households were endlessly reproduced by people who obeyed the "rules of the Japanese family system." Instead, on the one hand, I reconstruct kinship relations in Japan from immigrants' accounts of their kinship biographies and, on the other, regard the Japanese past and the American present that figure so centrally in these accounts as complex symbols whose meanings must be explicated.

The analytic strategy I have formulated for this study is one I think can be usefully applied to groups besides Japanese Americans and other ethnic groups whose conceptions of their particular cultural traditions and experiences as immigrants are similarly prominent in their discourse on kinship relations. It can help us better understand the social and symbolic processes shaping kinship even among those sectors of our society whose ethnicity has been made invisible by hegemonic processes that cast a particular cultural system as a generalized American one. For whether they view themselves as having an ethnic past that is Polish, Italian, African, English, or, in the case of "just plain American," one supposedly unmarked by ethnicity, all these folk commonly speak of a "traditional" past in opposition to the "modern" present. Like Japanese Americans, they too construct tradition by reconceptualizing the past in relation to the meaning of their actions in the present, thereby transforming past and present in a dialectic of interpretation.