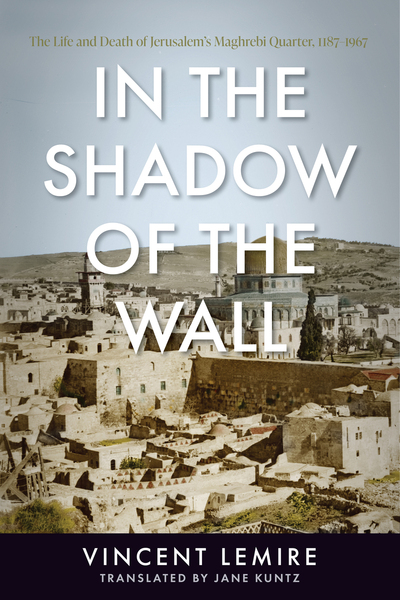 In the Shadow of the Wall
The Life and Death of Jerusalem's Maghrebi Quarter, 1187–1967
Vincent Lemire, Translated by Jane Kuntz

The Maghrebi Quarter of Jerusalem long sat in the shadow of the Western Wall, the last vestige of the Second Temple. Three days after the June '67 War, Israeli forces razed the Quarter, its narrow alleys widened and homes removed, to create the Western Wall Plaza. With this book, Vincent Lemire offers the first history of the Maghrebi Quarter—spanning 800 years from its founding by Saladin in 1187 to house North African Muslim pilgrims through to its destruction.

To bring this vanished district back to life, Lemire gathers its now-scattered documentation in the archives of Muslim pious foundations in Jerusalem and the Red Cross in Geneva, in Ottoman archives in Istanbul and Israeli state archives. He engages testimonies of former residents and looks to recent archaeological digs that have resurfaced household objects buried during the destruction. Today, the Western Wall Plaza extends over the former Maghrebi Quarter. It is one of the most identifiable places in the world—yet one of the most occluded in history. In the Shadow of the Wall offers a new point of entry to understand this consequential place.

Vincent Lemire is professor of contemporary history at Gustave Eiffel University and director of both the Open Jerusalem European Research Council project and the French Research Center in Jerusalem (CRFJ). He is a coauthor of Jerusalem: History of a Global City (2022) and author of Jerusalem 1900: The Holy City in the Age of Possibilities (2017).

"From the stones of the Western Wall Plaza, Vincent Lemire re-establishes the long-forgotten Maghrebi Quarter of the Old City to its rightful place in history. A fascinating and timely narrative."

—Roberto Mazza, author of Jerusalem: From the Ottomans to the British

"Engaging, sensitive and beautifully written, In the Shadow of the Wall brings to life a silenced and forgotten history, shedding light on the connection between historical knowledge and acknowledgment. Vincent Lemire shows us that the history of the Maghrebi Quarter is not only local, but global."

—Abigail Jacobson, The Hebrew University of Jerusalem, author of From Empire to Empire: Jerusalem Between Ottoman and British Rule

"In the Shadow of the Wall is a superb work of history that brings back to life the ancient Maghrebi Quarter. Vincent Lemire illuminates the history, the people, the buildings, the mosques, and the shrines of a storied Jerusalem neighborhood."

Columbia University, author of The Hundred Years' War on Palestine: A History of Settler Colonialism and Resistance, 1917-2017