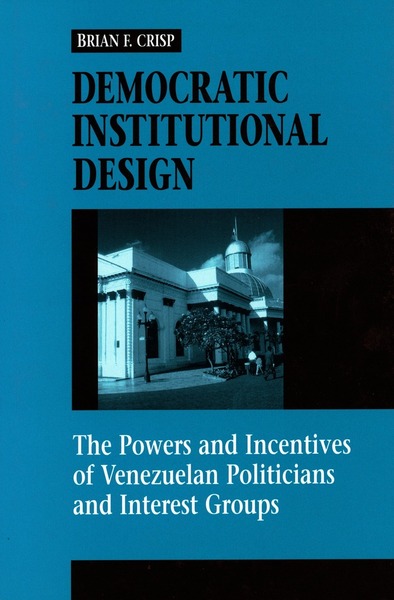 Based on the policy-making structures of Venezuelan government, this book examines the constitutionally allocated powers of the executive and legislature and shows how the powers of each branch are exercised given the incentives established by the electoral system and changing partisan strengths. Several institutional characteristics have led to a passive legislature and an activist chief executive. The advantages presidents enjoy as a result of their constitutional and partisan powers are demonstrated by a wealth of empirical evidence, including records of votes of censure, initiation of legislation, and the use of decree authority.

Because of its dominance, the Venezuelan executive branch is the focus of interest-group pressure, which is institutionalized through consultative commissions and a decentralized public administration. The author analyzes memberships of more than 300 advisory commissions and governing boards, revealing the preponderance of posts filled by umbrella agencies for business and labor. The interaction of this limited version of civil society with policy makers in the executive branch has led to a highly protectionist development strategy and excessive government subsidies. The strategy and the political process that made it possible were both exhausted by the end of the 1980s. Venezuela was in political and economic crisis.

The author places Venezuela in a comparative context with other Latin American states on three issues: the likelihood that executives will receive disciplined, majority support in the legislature; the constitutional powers of presidents; and the degree to which business and labor are formally incorporated through single peak associations. Participation and policy-making processes vary significantly across Latin American democracies, with few others reaching the level of centralization that has characterized Venezuela. At the other end of the spectrum, some Latin American institutional designs are characterized by diffusion and fragmentation. In conclusion, the author offers a blueprint to modify some of the counterproductive patterns associated with Venezuela, one of the longest-lived but now troubled democracies in Latin America.

Brian F. Crisp is Associate Professor of Political Science at the University of Arizona.

"The strong point of this book is its empirical focus which includes comparisons with other Latin American nations and proposals to overcome the concentration of power."

"This text is an excellent example of how research into a particular case can be carefully extrapolated to a broader context and for that reason alone merits reading by comparativists."