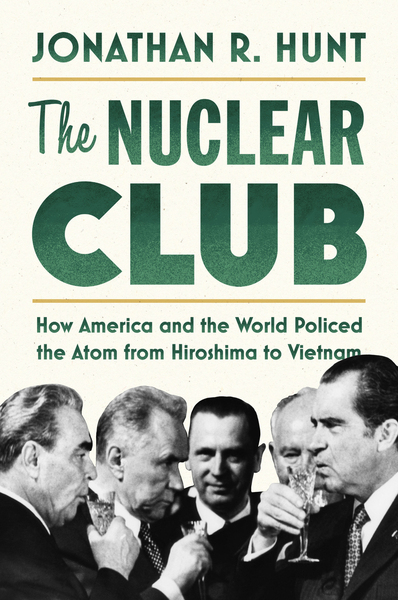 The Nuclear Club
How America and the World Policed the Atom from Hiroshima to Vietnam
Jonathan R. Hunt

The Nuclear Club reveals how a coalition of powerful and developing states embraced global governance in hopes of a bright and peaceful tomorrow. While fears of nuclear war were ever-present, it was the perceived threat to their preeminence that drove Washington, Moscow, and London to throw their weight behind the 1963 Limited Test Ban Treaty (LTBT) banishing nuclear testing underground, the 1967 Treaty of Tlatelolco banning atomic armaments from Latin America, and the 1968 Nuclear Non-Proliferation Treaty (NPT) forbidding more countries from joining the most exclusive club on Earth.

International society, the Cold War, and the imperial U.S. presidency were reformed from 1945 to 1970, when a global nuclear order was inaugurated, averting conflict in the industrial North and yielding what George Orwell styled a "peace that is no peace" everywhere else. Today the nuclear order legitimizes foreign intervention worldwide, empowering the nuclear club and, above all, the United States, to push sanctions and even preventive war against atomic outlaws, all in humanity's name.

"The Nuclear Club exposes a founding myth of the postwar order: that if great powers no longer fought each other, a more peaceful world would result. Jonathan Hunt shows how Cold War diplomacy defined who could intervene, be it for nuclear non-proliferation or "humanitarian" reasons, and how these interventions ultimately undermined the peacekeeping basis of the UN Charter."

—Elizabeth Borgwardt, author of A New Deal for the World: America's Vision for Human Rights

"In this ambitious and deeply researched study, Jonathan Hunt presents a sweeping international history of the rise and establishment of the nuclear non-proliferation regime after 1945. Packed with insightful analysis and telling detail, The Nuclear Club fills an important gap in our knowledge of the nuclear age."

"The Nuclear Club is eye-opening. Jonathan Hunt excavates the history of nuclear nonproliferation to reveal the central paradoxes at the heart of international relations. Deeply researched and thoroughly engaging, this book is a must-read for anyone concerned with the past, present, and future of world order."

"Jonathan Hunt's The Nuclear Club is a major achievement. It both traces the many failed efforts to halt the spread of nuclear weapons in the early 1960s and lifts the curtain in front of the international negotiations that finally led to the landmark Nuclear Nonproliferation Treaty in 1968."