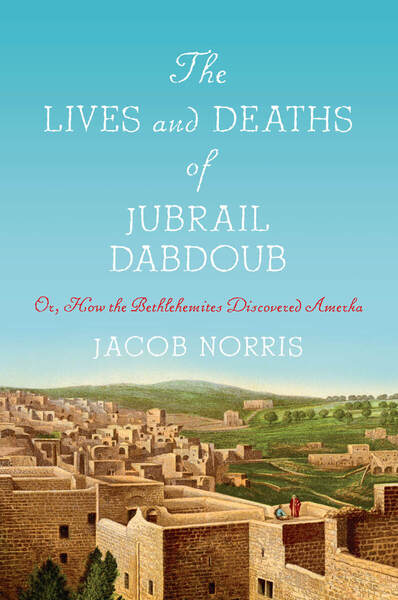 The Lives and Deaths of Jubrail Dabdoub
Or, How the Bethlehemites Discovered Amerka
Jacob Norris
SERIES: Worlding the Middle East

This is the fantastical, yet real, story of the merchants of Bethlehem, the young men who traveled to every corner of the globe in the nineteenth century. These men set off on the backs of donkeys with suitcases full of crosses and rosaries, to return via steamship with suitcases stuffed with French francs, Philippine pesos, or Salvadoran colones. They returned with news of mysterious lands and strange inventions—clocks, trains, and other devices that both befuddled and bewitched the Bethlehemites. With newfound wealth, these merchants built shimmering pink mansions that transformed Bethlehem from a rural village into Palestine's wealthiest and most cosmopolitan town. At the center of these extraordinary occurrences lived Jubrail Dabdoub.

The Lives and Deaths of Jubrail Dabdoub tells the story of Jubrail's encounters, offering a version of Palestinian history rarely acknowledged. From his childhood in rural Bethlehem to later voyages across Europe, East Asia, and the Americas, Jubrail's story culminates in a recorded miracle: in 1909, he was brought back from the dead. To tell such a tale is to delve into the realms of the fantastic and improbable. Through the story of Jubrail's life, Jacob Norris explores the porous lines between history and fiction, the normal and the paranormal, the everyday and the extraordinary.

Drawing on aspects of magical realism combined with elements of Palestinian folklore, Norris recovers the atmosphere of late nineteenth-century Bethlehem: a mood of excitement, disorientation, and wonder as the town was thrust into a new era. As the book offers an original approach to historical writing, it captures a fantastic story of global encounter and exchange.

Jacob Norris is Senior Lecturer in Middle Eastern History at the University of Sussex. He is the author of Land of Progress: Palestine in the Age of Colonial Development, 1905–1948 (2013) and codeveloper of the website Planet Bethlehem.

"The Lives and Deaths of Jubrail Dabdoub is a most original treatise on local knowledge—a story of donkeys, suitcases and miracles, and the saga of Bethlehem merchant families moving between Palestine and the Americas. Jacob Norris weaves an astute combination of historical discourse and magical realism."