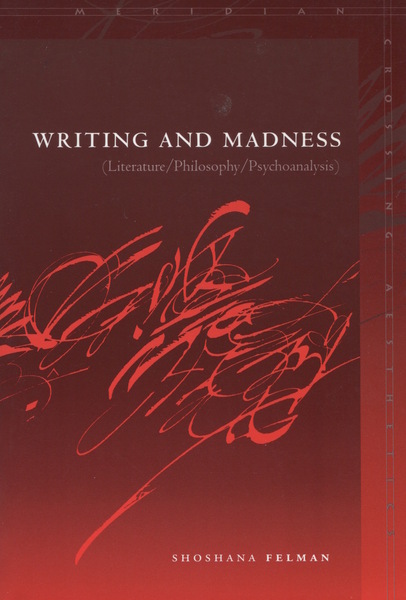 Writing and Madness
(Literature/Philosophy/Psychoanalysis)
Shoshana Felman Translated by Martha Noel Evans and Others With a new Preface and two interviews with the author
SERIES: Meridian: Crossing Aesthetics

Writing and Madness is Shoshana Felman's most influential work of literary theory and criticism. Exploring the relations between literature, philosophy, and psychoanalysis through brilliant studies of Balzac, Nerval, Flaubert, and James, as well as Lacan, Foucault, and Derrida, this book seeks the specificity of literature in its relation to what culture excludes under the label "madness." Why and how do literary writers reclaim the discourse of the madman, and how does this reclaiming reveal something essential about the relation between literature and power, as well as between literature and knowledge?

Every literary text continues to communicate with madness—with what has been excluded, decreed abnormal, unacceptable, or senseless—by dramatizing a dynamically revitalized relation between sense and nonsense, reason and unreason, the readable and the unreadable. This revelation of the irreducibility of the relation between the readable and the unreadable constitutes what the author calls la chose littéraire—the literary thing.

Shoshana Felman is Thomas E. Donnelley Professor of French and Comparative Literature at Yale University. Her books include Literature and Psychoanalysis, Testimony, and (most recently) The Juridical Unconscious: Trials and Traumas in the Twentieth Century. Her The Scandal of the Speaking Body: Don Juan with J. L. Austin, or Seduction in Two Languages, is being reissued in a new edition by Stanford University Press, with a Foreword by Stanley Cavell and an Afterword by Judith Butler.