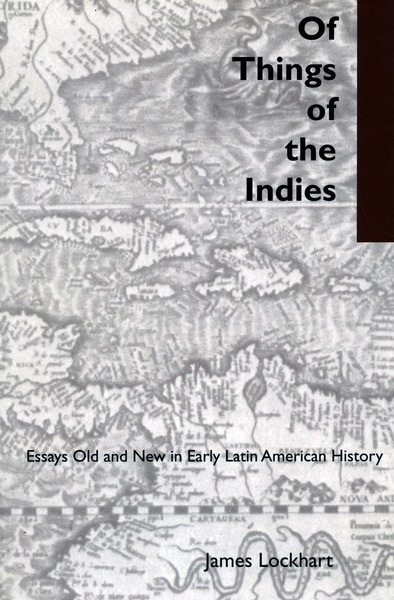 This volume offers an illuminating overview of the work of a pioneering and highly distinguished scholar of early Latin American social and cultural history and philology. Known for the originality of his approach and the variety of his research interests, James Lockhart has gone from studying social history using career pattern methods to an ethnohistory emphasizing indigenous-language philology, all the while stressing general interpretation, synthesis, historiography, and the development of analytical concepts and categories. The present volume illustrates all these interests and activities within the covers of a single book; the reader can see not only common threads running through the individual essays, but also the close relationships between types of scholarship all too often seen as utterly distinct.

The "old and new" of the subtitle is meant literally; the first piece was written in 1968, the last in 1998. Some are already well known, while others have appeared in quite obscure venues. Four of the twelve chapters are published here for the first time. They elucidate the reading of texts for social and cultural purposes, expound on aspects of Nahuatl historical linguistics, discuss the problematic nature of the concept of resistance in Western Hemisphere culture encounters, and review the author's experience with the scholarly disciplines, which involves a certain amount of intellectual autobiography.

The tone of the volume is generally colloquial, for nine chapters originated as lectures and attempt to interpret for a wider audience the author's research as represented in his monographic books. Previously published pieces have been revised or expanded to a greater or lesser degree. Their subjects include the transition from encomienda to hacienda, the evolution of social history in Latin American studies, the economic rationality of Spanish procedures, the changing role of merchants in Spanish America, the editing of Nahuatl texts, the author's concept of Double Mistaken Identity, and the process of cultural contact in three major Latin American areas.

James Lockhart is Professor Emeritus of History at the University of California, Los Angeles. Among his many publications are Spanish Peru, 1532-1560: A Social History (1968, 1994), The Nahuas After the Conquest: A Social and Cultural History of the Indians of Central Mexico, Sixteenth Through Eighteenth Centuries (Stanford, 1992), and The Story of Guadalupe: Luis Laso de la Vega's "Huei tlamahuiçoltica" of 1649 (co-editor and co-translator, Stanford, 1998).

"Many would say that Lockhart has been the most original of colonial Spanish Americanists writing in English during the last thirty years. This collection is powerful evidence for that opinion."

"This collection of wide-ranging essays showcases the ongoing work of one of the most distinguished and productive scholars of early Latin America. . . . This is a book that proposes, delights, and illuminates. . . . Those who love innovative wide-ranging research, who still regard scholarship as a potentially joyful intellectual challenge, will want this work on their bookshelves and on their students' reading lists."

"In his rich and rewarding volume of essays, Of Things of the Indies: Essays Old and New in Early Latin American History, Lockhart reveals in the more autobiographical of the essays the influences—personal, educational, philosophical—that shaped his deeply interdisciplinary, empirical, almost anti-theoretical approach to the study of early Latin American social and cultural history. His practically super-human powers of concentration and levels of energy can be perceived."