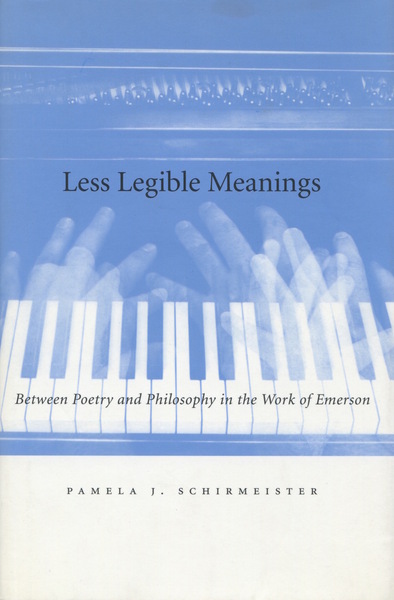 Less Legible Meanings
Between Poetry and Philosophy in the Work of Emerson
Pamela J. Schirmeister

Examining both why and how Emerson evades the ancient quarrel between literature and philosophy, this book entirely rethinks the nature of Emerson's radical individualism and its relation to the possibility of an ethics and a politics.

The author argues that the quarrel between literature and philosophy never took place in America, and that instead traditional philosophical work staged itself here as a form of literary praxis and cultural therapeutics. Epitomized in the work of Emerson, this praxis takes shape explicitly in Emerson's understanding of democracy and occurs as an exchange within the act of reading. This is the exchange that Emerson so eloquently calls for in "The American Scholar" under the name of "letters." Emerson's project for American letters is the creation of a new national identity; as Less Legible Meanings makes clear, we have not yet understood the full range of implications that this project entails.

After situating American letters in relation to German and British Romanticism and the features of American culture that augmented and altered their reception in the United States, the book goes on to explore the type of reading that Emersonian rhetoric engenders. Both persuasive and tropological, this rhetoric elicits from the reader something similar to psychoanalytic transference. Its goal is to lead the reader to a point at which representational logic breaks down so that a new subject can take shape. The purpose of such rhetoric, however, extends well beyond personal self-creation, because the construction of the subject emerges as the very possibility of the passage from the private sphere to the public one. In this passage, our entire notion of liberal individualism must be rethought, and with it, the pragmatic question of Emersonian ethics and politics.

A revisionary study of some of Emerson's central essays, Less Legible Meanings also invites the reader to reconsider the nature of Emerson's influence on contemporary American culture and to discover new ways in which we might continue to understand his work. Interdisciplinary in scope, the book makes equal use of the history of philosophy, psychoanalytic theory, and cultural history.

Pamela J. Schirmeister has taught at Middlebury College, New York University, and the University of Konstanz. She is the author of The Consolations of Space: The Place of Romance in Hawthorne, Melville, and James (Stanford, 1990) and has edited an edition of Emerson's Representative Men.

“An ambitious, original, and important book that will change the way we read Emerson’s work.”—Edgar A. Dryden, University of Arizona