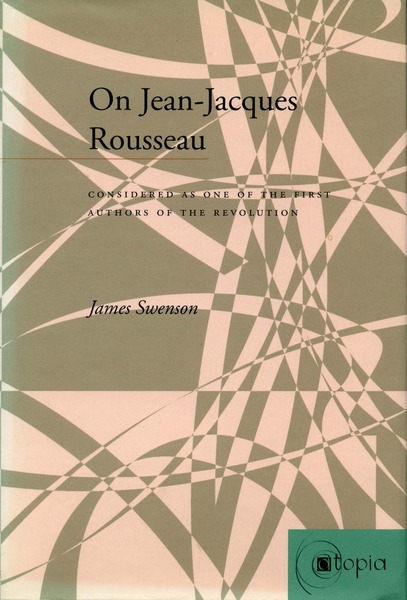 On Jean-Jacques Rousseau
Considered as One of the First Authors of the Revolution
James Swenson
SERIES: Atopia: Philosophy, Political Theory, Aesthetics

In order to grasp what it means to call Rousseau an "author" of the Revolution, as so many revolutionaries did, it is necessary to take full measure of the difficulties of literary interpretation to which Rousseau's work gives rise, particularly around such a charged term as "author."

On Jean-Jacques Rousseau shows that Rousseau's texts consistently generate a division in their own reading, a division both designated and masked by the fiction of authorship. These divisions can occur successively—as in the narrative reversals and discontinuities characteristic of Rousseau's fictional and autobiographical works—or simultaneously, in the form of incompatible attempts to apply the lessons of a single text to an urgent historical moment. Given the structure of these texts, their "influence" can only occur in an equally paradoxical form. Rousseau's contribution to revolutionary thinking lies in his conceptualization of the constitutive function of misunderstanding and narrative discontinuity, in history and political action as well as in literature.

Such misunderstandings and discontinuities are particularly well illustrated by the vicissitudes of the reading of Rousseau's texts during the revolutionary period, a moment when "readings" occurred as political programs. The Revolution enacted Rousseau precisely to the extent that revolutionaries could not agree on what action he called for. He is "one of the first authors of the Revolution" not because he was one of its causes, but because he provided the terms in which the logic of the revolutionary process becomes intelligible.

James Swenson is Assistant Professor of French at Rutgers University.

"This book is a tour de force, carefully argued, erudite, beautifully written, and strikingly original. It offers a new understanding about an idea that is almost a cliché for historians of the French Revolution—that Rousseau's political writings somehow 'caused' the revolution. Swenson problematizes this causality . . . by looking at Rousseau's entire oeuvre."

"Recent emphasis on the political culture of the French Revolution has renewed interest in the relationship between the Revolution and the Enlightenment, including the importance of Jean-Jacques Rousseau. James Swenson's fascinating study contributes to this discussion."

"In a series of well-informed, stimulating, and thought-provoking chapters, Swenson traces the connections between Rousseau's political thought and various passages in his autobiographical writings and his works of fiction."