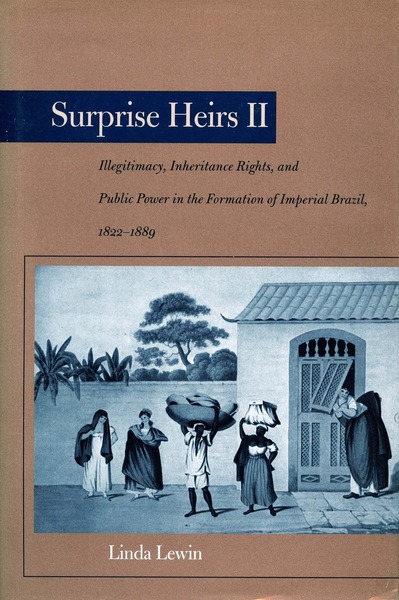 Winner of the 2003 Hubert Herring Award, sponsored by the Pacific Coast Council on Latin American Studies.

Honorable Mention in the 2004 Bolton-Johnson Prize, sponsored by the Conference on Latin American History.

Honorable Mention in the 2005 Warren Dean Memorial Prize, sponsored by the Conference on Latin American History.

Focusing on the inheritance rights of people born outside wedlock, this book explores the legal evolution of their rights as Brazil moved from colony to nation. It offers a unique counterpoint to the conventional political history of the Brazilian Empire, which ignores important legal change involving family and inheritance law. The book also provides a new and complementary approach to recent scholarship on the family in nineteenth-century Brazil by using that research as a starting point for examining illegitimacy, marriage, and concubinage from the neglected perspective of legal change.

The author’s exhaustive study of parliamentary debates reveals how the private sphere of the family acquired fundamental significance in the public discourse of Brazil’s imperial legislators. The concluding theme of the book treats the reactionary shift away from liberal reform, the result of the “scandal in the courtroom” that the reform generated.

Linda Lewin is Professor of History at the University of California, Berkeley. She is the author of Politics and Parentela in Paraíba: A Case Study of Family-Based Oligarchy in Brazil

"Long after most of our books have been consigned to remote storage facilities or (worse yet) weeded, historians will continue to consult Lewin's invaluable Surprise Heirs volumes."

"These two volumes [Surprise Heirs I and Surprise Heirs II] represent a major contribution to our understanding of how law relates to social realities, political agendas, and religious values. Moreover, Lewin's meticulously researched study is a sterling addition to a small but growing list of works that seriously address the social and economic effects of law in either the private or the public spheres."