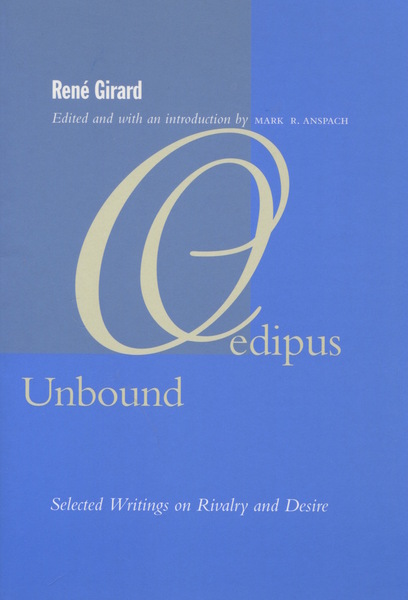 Oedipus Unbound
Selected Writings on Rivalry and Desire
René Girard Edited and with an Introduction by Mark R. Anspach

Did Oedipus really kill his father and marry his mother? Or is he nothing but a scapegoat, set up to take the blame for a crisis afflicting Thebes? For René Girard, the mythic accusations of patricide and incest are symptomatic of a plague-stricken community's hunt for a culprit to punish, and Girard succeeds in making us see an age-old myth in a wholly new light.

The hard-to-find writings assembled here include three major early essays, never before available in English, which afford a behind-the-scenes glimpse at the emergence of Girard's scapegoat theory from his pioneering analysis of rivalry and desire. Girard unbinds the Oedipal triangle from its Freudian moorings, replacing desire for the mother with desire for anyone—or anything—a rival desires. In a wide-ranging and provocative introduction, Mark R. Anspach presents fresh evidence for Girard's hypotheses from classical studies, literature, anthropology, and the life of Freud himself.

René Girard is Professor Emeritus of French at Stanford University. He is the author of many books, including Violence and the Sacred (1977), The Scapegoat (1986), Job: The Victim of His People (Stanford, 1987), Things Hidden Since the Foundation of the World (Stanford, 1987), and I See Satan Fall Like Lightning (2001).

"Readers of Oedipus Unbound will, I wager, both enjoy and find enlightenment in the newly-combined set of essays by Girard and Mark Anspach's expert introduction. My advice would be to take the book down from the shelf and take it home."