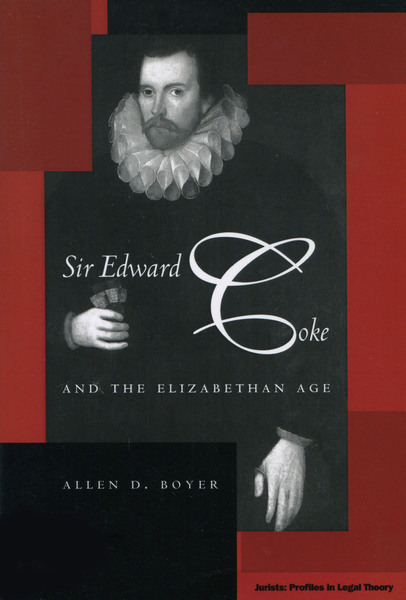 This book breaks new ground as the first scholarly biography of Coke, whose most recent general biography appeared in 1957, and draws revealingly on Coke's own papers and notebooks. The book covers Coke's early life and career, to the end of the reign of Elizabeth I in 1603 (a second volume will cover Coke's career under James I and Charles I). In particular, this book highlights Coke's close connection with the Puritans of England; his learning, legal practice, and legal theory; his family life and ambitious dealings; and the treason cases he prosecuted.

Allen Boyer is senior appellate counsel for the Department of Enforcement of the Financial Industry Regulatory Authority.

"[Sir Edward Coke and the Elizabethan Age] is well written with flashes of brilliance."

"It would have been easy to provide a portrait of a successful if idiosyncratic lawyer, but Boyer gives us warts and all and manages to capture a real sense of the man himself."

"[Boyer] brings his subject vividly to life and writes with verve adn imagination, presenting a well-structured, comprehensive and impressively researched book that serves both the legal historian and the general reader very well. Sir Edward Coke and the Elizabethan Age should be considered by any student of Elizabethan history because, in exploring a great lawyer and the law, it also sheds light on politics, religion, culture and society. I will not be alone in looking forward to the second volume."

"This is a magnificent...book. It is magnificent in that it tells an enormously affecting story that feels like a journey to Tudor England, a journey that Boyer gracefully leads, with splendid originality of voice....According to the book's (well-designed) jacket a second volume is forthcoming—and it is surely worth waiting for."

—Law, Culture, and the Humanities

"This is a good book, carefully researched and written in an accessible and engaging style. It integrates the best recent scholarship which brings light to bear upon the historical milieu in which Sir Edward Coke rose to prominence."