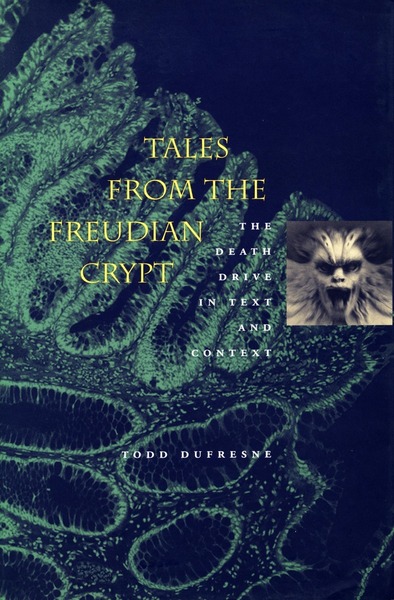 Tales from the Freudian Crypt is a fundamental reassessment of the Freud legend that aims to shake the very foundations of Freud studies. Writing from the perspective of intellectual history, the author traces the impact that Freud's essay Beyond the Pleasure Principle has had, and continues to have, on twentieth-century thought. Designed as both an introduction and a corrective to the vast literature on Freud, the book explores the trail left by Freud's late theory of the death drive, paying special attention to its ramifications in the fields of biography, biology, psychotherapy, philosophy, and literary theory. The author ironically concludes that if there were such a thing as a death drive, it would look like this seemingly endless and in many ways arbitrary proliferation of the literature on Freud.

After first undertaking to demystify the pretensions of this literature, from the works of Sandor Ferenczi to those of Jacques Lacan, the author proposes a theory that sheds new light on the so-called cultural works of Freud's final years. He argues that the death drive theory was an elaborate ruse that Freud adopted to insulate his "findings" against criticism directed from outside the field of psychoanalysis—that Freud's troubling recourse to metapsychology was closely tied to his lifelong fear of suggestion. The author delivers a carefully reasoned, sustained blow to the culture of psychoanalysis—theoretical, therapeutic, institutional—which is driven by what it desires and fears most: death. In sum, Tales from the Freudian Crypt is offered as a kind of bankbook, audit, and investment plan for future work in Freud studies.

Todd Dufresne is Associate Professor and Chair of the Philosophy Department at Lakehead University. He is the author of Tales from the Freudian Crypt: The Death Drive in Text and Context (Stanford, 2000) and Killing Freud.

"Here is a brilliant, wide-ranging, exuberant book by a young scholar who knows the literature surrounding psychoanalysis as thoroughly, and as cannily, as anyone alive. Nowhere has the deep strangeness of Freud's mind and tradition been more tellingly explored. It is a marvelous contribution not only to Freud studies but to modern intellectual history as well."

"An excellent text. Psychoanalysis in Dufresne's hands reads like a comic book concerned with horror, a thanatographical delight written not so much for adolescent boys but for philosophers . . . The proverbial stake in the heart that finally kills the undead monster is delivered by Dufresne with a gusto and verve not normally found in academic books on psychoanalysis. Dufresne is the vampire slayer of the Freud-bashers."

"Dufresne is nothing if not a rigorous archaeologist, the connoisseur of delectable fragments, the shards of folly that give us clues to an entire civilization. As he dusts off each recovered piece and sets it on the shelf, he constructs not so much an argument as a gallery: an exhibition of curiosities."

"Five stars. A seminal,groundbreaking body of work . . . Tales is a highly recommended contribution to Freudian studies and would admirably serve as a model approach to evaluating and expanding other Freudian concepts throughout the coming decades."

"Dufresne's original, provocative, and scholarly work is a major intervention in current debates about the import and significance of psychoanalysis. It is a much needed blood transfusion that will cause a stir."

"Dufresne surveys this huge and untidy literature, but he knows better than to simply critique it. Rather than adding one more critical life-support system to the ever-proliferating body of psychoanalysis, he advocates its right to die: leave it alone, let it choke to death on its own waste, like the infusorians described by Freud in Beyond the Pleasure Principle. Dufresne reads Freud like no other, understanding full well that psychoanalysis is fundamentally immune to criticism, because it was never concerned with reality."