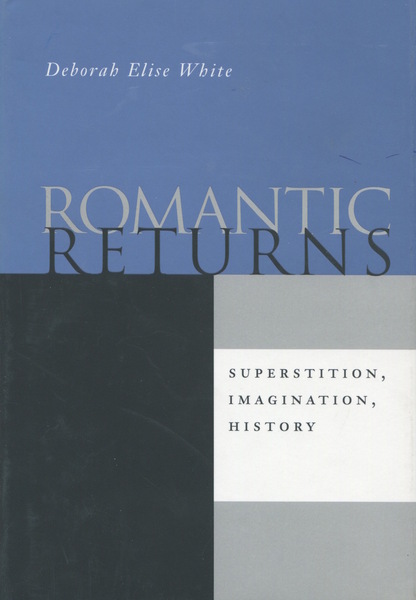 Romantic Returns explores the theorization and operation of "imagination" in pre-romantic and romantic writing. Drawing on the poetry and prose of William Collins, William Hazlitt, and Percy Bysshe Shelley, it shows the continuing importance of their understanding of imagination for contemporary debates about the historicity of literature. Historicist readings of romanticism have done much to establish how and why romantic aesthetics is ideological—an illusory if effective evasion of its material conditions. Romantic Returns challenges this position by arguing that romantic aesthetics is, rather, critical—a reflective if problematic articulation of those conditions. The argument foregrounds the ways in which the aesthetics of romanticism inform its political and economic speculations.

The book opens with an examination of mid-eighteenth-century debates about the role of superstition in the constitution of a national literary tradition. It considers, in particular, how Collins's odes figure Scotland as the site of a "superstitious" poetry that must be assimilated into British history even as Collins questions the very framework of assimilation. This ambiguous defense of superstition in the national polity is rewritten by romanticism as a defense of imagination. For the romantics, the concept of imagination involves an explicit theorization of how the mind's projections play a constitutive role in what appear to be social norms and economic facts.

Hazlitt clarifies this position in his Essay on the Principles of Human Action. The Essay develops a rhetorical theory of imagination in order to deconstruct the entire metaphysical basis of self-interest on which eighteenth- and nineteenth-century political economy is based. Hazlitt's political pamphlets bring this argument to bear on his analysis of the economic interests fueling the Napleonic wars. Despite Hazlitt's enormous and widely acknowledged influence, his writings have been little studied on their own account. Romantic Returns underlies their centrality to the romantic articulation of aesthetics and politics.

The final sections of the book engage Shelley's complex interrogation of the contradictions involved in just such articulations. In both his poetry and prose, Shelley turns to law and history as fields in which these contradictions can be negotiated or even resolved. But Shelley, who once called poets "unacknowledged legislators," suggests that violence may be unavoidable in any imaginative legislation that attempts to realize itself in properly "historical" action. The passage from poetry to politics cannot evade the problem of force. Tracing the crossings between "superstition," "imagination," and "history" in all three of these writers, Romantic Returns shows how difficult it is to maintain such crossings. In doing so, it shows, too, the continuing challenge of romanticism to contemporary historicism.

“...Deborah White superbly exemplifies the intellectual integrity that is required to confront the unresolved questions of literary theory.”—Studies in Romanticism