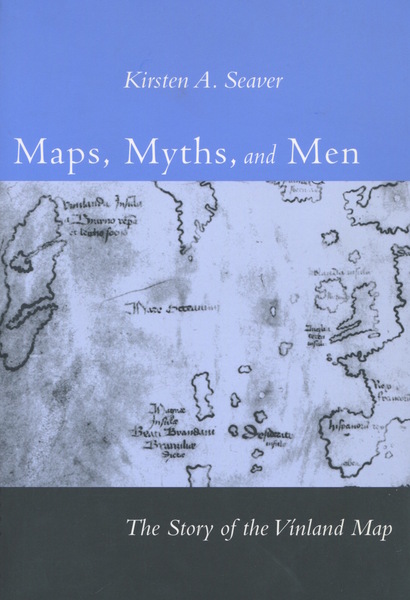 Maps, Myths, and Men
The Story of the Vinland Map
Kirsten A. Seaver

The "Vínland Map" first surfaced on the antiquarian market in 1957 and the map's authenticity has been hotly debated ever since—in controversies ranging from the anomalous composition of the ink and the map's lack of provenance to a plethora of historical and cartographical riddles. Maps, Myths, and Men is the first work to address the full range of this debate. Focusing closely on what the map in fact shows, the book contains a critique of the 1965 work The Vinland Map and the Tartar Relation; scrutinizes the marketing strategies used in 1957; and covers many aspects of the map that demonstrate it is a modern fake, such as literary evidence and several scientific ink analyses performed between 1967 and 2002. The author explains a number of the riddles and provides evidence for both the identity of the mapmaker and the source of the parchment used, and she applies current knowledge of medieval Norse culture and exploration to counter widespread misinformation about Norse voyages to North America and about the Norse world picture.

Kirsten A. Seaver is an independent historian, a Fellow of the Royal Geographical Society, London, a novelist, and a translator. She is the author of The Frozen Echo (Stanford, 1996).

"In a superlative piece of cross-disciplinary detective work, Norwegian independent scholar Seaver deconstructs the machinations, manipulations, and odd strokes of genius that have played into the story of the Vinland map."

"Seaver has created the definitive portrait of the Vinland Map controversy and has shown us a route home."

"...a fascinating and very readable investigation..."

"In Maps, Myths, and Men, Kirsten A. Seaver provides a supremely well-researched and documented account of the map's nearly forty-years of public controversy....As well as providing the most detailed account and analysis of the map available, Seaver has also provided a book which allows historians and scholars to reflect more widely on the ways in which personal lives and situations interfere with and inform objective scholarship."

"...the sustained and comprehensive argument presented here is a masterly synthesis that should represent the last word on one of the most contentious debates in modern medieval scholarship."

"It is an enjoyable book to read, and the author writes in such an enthusiastic way that the book reads almost like a detective story."