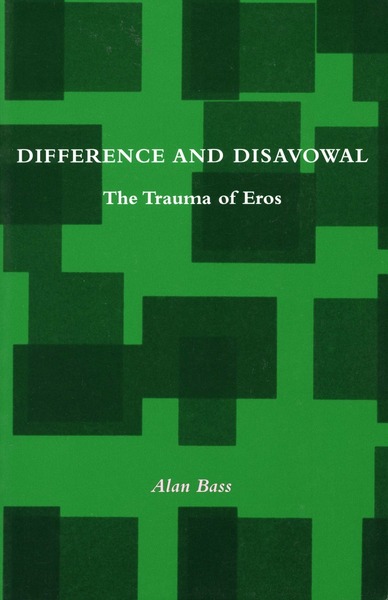 Difference and Disavowal
The Trauma of Eros
Alan Bass

Difference and Disavowal is a major rethinking of a central tenet of Freudian psychoanalysis—the repression theory. It centers on fundamental issues in practice and theory, beginning with a central conundrum for clinical psychoanalysis: how to understand apparently analyzable patients who resist the essential therapeutic measure of analysis—interpretation.

Freud's conception of an unconscious force that simultaneously differentiates, binds, and raises tension levels—Eros—demands integration with the theory of disavowal. This integration produces a theory of an inevitable trauma, an inevitable registration and repudiation of difference, as an essential element in psychoanalytic theories of mind, psychopathology, and treatment.

At the end of his life Freud himself was beginning to rethink repression as the cornerstone of his work. He was beginning to see disavowal as the foundation of defensive process. Once disavowal is understood in relation to difference and Eros, one has a major tool with which to rethink the development of Freudian psychoanalysis from its earliest days to the present. The author shows how other analysts—such as Ferenczi, Abraham, Klein, Loewald, and Winnicott—have unwittingly but crucially contributed to the problem of resistance to interpretation

Alan Bass, a Training and Supervising Analyst at several psychoanalytic institutes in New York, is also on the Graduate Faculty at New School University. He is the translator of four books by Jacques Derrida.

"For a piece of coherent and seductive theorizing, one must turn to Bass."