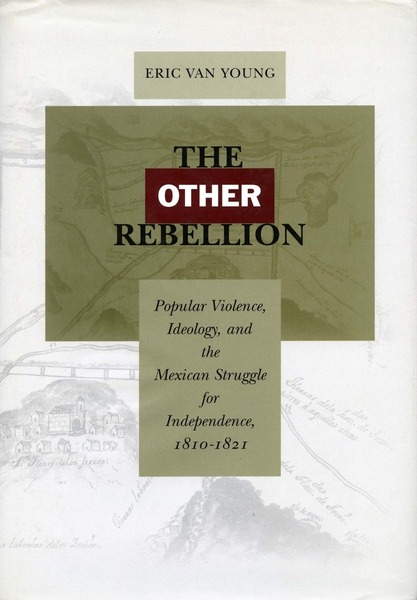 The Other Rebellion
Popular Violence, Ideology, and the Mexican Struggle for Independence, 1810-1821
Eric Van Young

Winner of the 2002 Bolton-Johnson Prize, sponsored by the Conference on Latin American History.

Mexico’s movement toward independence from Spain was a key episode in the dissolution of the great Spanish Empire, and its accompanying armed conflict arguably the first great war of decolonization in the nineteenth century. This book argues that in addition to being a war of national liberation, the struggle was also an internal war pitting classes and ethnic groups against each other, an intensely localized struggle by rural people, especially Indians, for the preservation of their communities.

While local and national elites focused their energies on wresting power from colonial authorities and building a new nation-state, rural people were often much more concerned about keeping village identities and lifeways intact against the forces of state expansion, commercialization, and modernization. Conventional wisdom says that Mexican independence was achieved through a cross-class and cross-ethnic alliance between creole ideologues, military leaders, and a mass following. This book shows that this is not only an incomplete explanation of what went on in Mexico during the decade of armed confrontation that led to Mexico’s independence, but also a distortion of Mexican social and cultural history.

The author delves deeply into life histories, previously unexamined texts, statistical social profiling, and local historical ethnography to examine the dynamics of popular rebellion. He focuses especially on Mexico’s Indian villages, but also considers the role of parish priests as insurgent leaders; local conflicts over land, politics, and religious symbols; the influence of messianism and millenarianism in popular insurgent ideology; and the everyday language of political upheaval.

Eric Van Young is Professor and Chair of the Department of History and Associate Director of the Center for U.S.-Mexican Studies at the University of California, San Diego. His most recent book is Colección documental sobre la Independencia Mexico.

"One of the original champions of the 'local conflicts' perspective was undoubtedly Eric Van Young, who in his groundbreaking and innovative study of popular insurgency during the War of Independence, The Other Rebellion, was able to provide, by analyzing the documents that were generated by the trials of 1,284 insurgents of humble origins, a particularly persuasive case for us to take local grievances seriously."

"This is a work of prodigious scholarship. . . . The tome is deeply learned with many references to anthropology, psychiatry, psychology, and sociology. . . . The book is judiciously written, superbly argued, and relentless. . . . More than any historian in recent memory, Van Young literally lets the people speak for themselves through the documents."

"van Young has thoroughly examined and incorporated significant primary archival and secondary sources, from both in the United States and Mexico, in this superbly researched, well-written monograph of the causes of the rebellion in Mexico that resulted in independence. . . . The Other Rebellion offers important new insights and perspectives and would be especially useful for upper-level undergraduates, graduate students, and scholars interested in studying Mexico in the early nineteenth century."

"This is an important book—vast, deeply researched, and carefully argued. . . . Like every important work, this one raises questions that will contribute to persistent debates."

"Ambitious in size, scope, and revisionist objective. [The Other Rebellion's] theoretical and methodological sophistication and ecumenism challenge and reward the reader. The end result is essential reading for those interested in the history of Mexico, and a work that provides ample rewards to those drawn more generally to the study of popular upheaval in the modern world . . . .The quantitative data, supported by a close reading of a wide variety of qualitative sources, yield provocative results . . . .With treasures throughout, readers with specialties beyond those of the book's primary audience, as well as those squarely within it, will be greatly enriched by sticking with this book to the end."

"The atmosphere of rural life is highlighted compellingly from the author's exhaustive research and brilliant analysis."

"This is a landmark book, the result of years of both assiduous research and . . . serioius thinking. . . . The Other Rebellion is an enjoyable, enlightening, and stimulating read."

" . . . [T]he book offers a bold and complex study of rebellion at the local and district levels, presenting readers with the raw materials needed to determine what motivated village people to rebel."