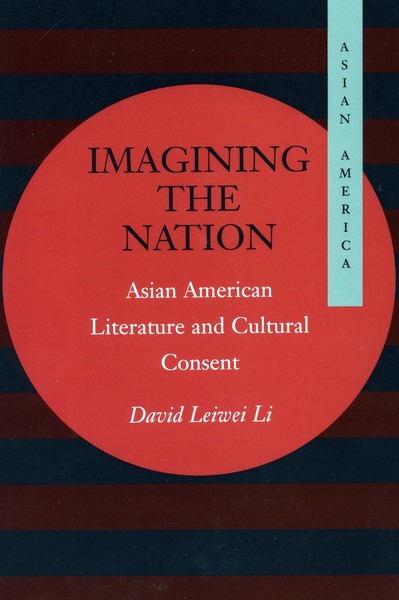 Since the 1970's, when Maxine Hong Kingston began publishing her prize-winning books, we have seen an explosive growth in Asian American literature, a literature that has won both popular and critical acclaim. Literary anthologies and critical studies attest to a growing academic interest in the field. This book seeks to identify the forces behind this literary emergence and to explore both the unique place of Asian Americans in American culture and what that place says about the way Americanness is defined.

The author is preoccupied with how the sense of the nation is disseminated through the practice of reading and writing, and he argues that Asian American literature is a productive discursive negotiation of the contemporary contradiction in American citizenship. By analyzing the textual strategies with which literary Asian America is represented, the book shows how the "fictive ethnicity" of the nation continues to exert its regulatory power and suggests how we can work toward a radical American democratic consent.

Through nuanced readings of exemplary texts, the author delineates how Asian American literary production has become a site for the creation of Asian American subjects and community. The texts range from Kingston's enigmatic Tripmaster Monkey to the seductive cunning of Amy Tan's The Joy Luck Club; from Bharati Mukherjee's romantic Jasmine to the geocultural ambivalence of David Mura's Turning Japanese; and from the transvestic subversion of David Henry Hwang's M. Butterfly to the transpirational tropes of David Wong Louie's Pangs of Love.

Imagining the Nation integrates a fine appreciation of the formal features of Asian American literature with the conflict and convergence among different reading communities and the dilemma of ethnic intellectuals caught in the process of their institutionalization. By articulating Asian American structures of feeling across the nexus of East and West, black and white, nation and diaspora, the book both sets out a new terrain for Asian American literary culture and significantly strengthens the multiculturalist challenge to the American canon.

David Leiwei Li is Collins Professor of the Humanities at the University of Oregon.

"This is a well-researched, precisely written text that contributes much to the fields of ethnic studies, Asian American studies, and literary criticism. The author demonstrates intellectual breadth and versatility as he attempts to map an Asian American corpus of literature. . . . A rich and valuable work."

"This is an excellent study of Asian American narratives . . . a shrewdly argued scholarly achievement."

"Li provides an original, penetrating, and sophisticated analysisi of canon-formation, literarty representation, and ethnic agency that makes an importatn contribution ot the field."