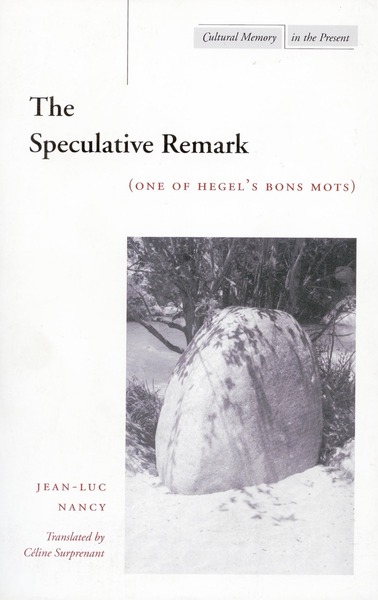 The Speculative Remark
(One of Hegel’s Bons Mots)
Jean-Luc Nancy Translated by Céline Surprenant
SERIES: Cultural Memory in the Present

This work, by one of the most innovative and challenging of contemporary thinkers, pivots on a Remark added by Hegel in 1831 to the second edition of his Science of Logic. As a model of close reading applied both to philosophical texts and the making of philosophical systems, The Speculative Remark played a significant role in transforming the practice of philosophy away from system building to analysis of specific linguistic detail, with meticulous attention to etymological, philological, and rhetorical nuance.

Nancy uses his extended examination of the Remark to delineate certain overall strategies in several Hegelian texts that militate for language-oriented readings of Hegel, as shown in Nancy's redefinition of such key terms as Aufhebung, mediation, and speculation. Nancy's reading progresses from speculative words and propositions to registering the speculative itself. While he avoids analyzing Hegel's system as such, Nancy reconstructs the Hegelian trajectory on a basis of tropes, building from propositions rather than structures, elements, and cycles.

The overview that emerges in the final chapter and epilogue constitutes a broad statement about Hegel's practice and significance, one nuanced by close attention to his deployment of rhetoric and linguistic play. The Speculative Remark thus furnishes a model for a theoretically aware approach to all systematic philosophy, while providing a significant historical contribution to the evolution of contemporary critical theory.

Jean-Luc Nancy is Professor of Philosophy at the University of Strasbourg. Stanford has published four of his books: Being Singular Plural (2000), The Muses (1996), The Birth to Presence (1993), and The Experience of Freedom (1993).