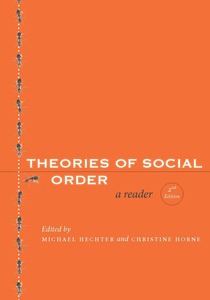 About the Authors
Contact
Reviews
Ordering Information
[ Back to main page ]

Michael Hechter is Foundation Professor of Global Studies, Political Science, History, and Social Dynamics and Complexity at Arizona State University. He is the author of Internal Colonialism: The Celtic Fringe in British National Development, 1536-1966 (1975; 1999), which was selected as one of Best Books of the Century by the International Sociological Association, Principles of Group Solidarity (1987), and Containing Nationalism (2001). His is co-editor of Social Institutions: Their Emergence, Maintenance and Effects (1990), with Reinhard Wippler and Karl-Dieter Opp; The Origin of Values (1993), with Richard Michod and Lynn Nadel; Social Norms (2001, 2005), with Karl-Dieter Opp; and Theories of Social Order (2003), with Christine Horne. He also edited The Microfoundations of Macrosociology (1983). His writings have been translated into Italian, Japanese, Hungarian, Chinese, Arabic, French, Spanish, and Georgian.

Christine Horne is Associate Professor of Sociology at Washington State University. She is the author of The Rewards of Punishment: A Relational Theory of Norm Enforcement (2009), and coeditor of Experimental Studies in Law and Criminology (2009), with Michael Lovaglia, and Theories of Social Order: A Reader (2003), with Michael Hechter.

THE COMPLETE WORKS OF FRIEDRICH NIETZSCHE

CULTURAL MEMORY IN THE PRESENT

THE CULTURAL LIVES OF LAW

EMERGING FRONTIERS IN THE GLOBAL ECONOMY

INNOVATION AND TECHNOLOGY IN THE WORLD ECONOMY

RELIGION IN THE AMERICAN WEST

SQUARE ONE: FIRST-ORDER QUESTIONS IN THE HUMANITIES

STANFORD STUDIES IN LAW AND POLITICS

STANFORD STUDIES IN MIDDLE EASTERN AND ISLAMIC SOCIETIES AND CULTURES