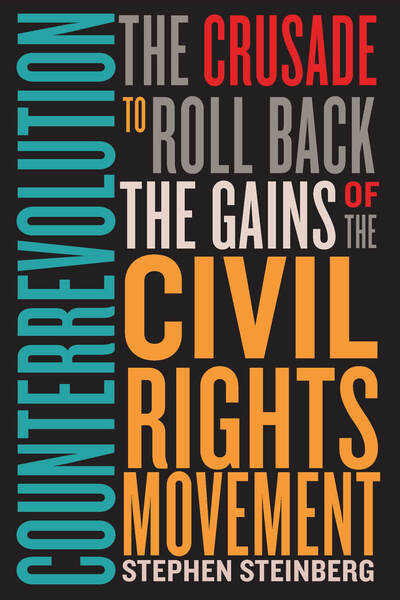 It was a stroke of genius really for white Americans to give Negro Americans the name of their problem, thereby focusing attention on symptoms (the Negro and the Negro community) instead of causes (the white man and the white community).

We use all manner of euphemisms and terms of art to keep from directly addressing the racial reality in America. This may be some holdover from a bygone time, but it is now time for it to come to an end.

Take for instance the term “race relations.” Polling organizations like Gallup and the Pew Research Center often ask respondents how they feel about the state of race relations in the country.

I have never fully understood what this meant. It suggests a relationship that swings from harmony to disharmony. But that is not the way race is structured or animated in this country. From the beginning, the racial dynamics in America have been about power, equality and access, or the lack thereof. . . .

So what are the relations here? It is a linguistic sidestep that avoids the true issue: anti-Black and anti-other white supremacy.

In The Feminine Mystique, published in 1963, Betty Friedan came up with an ingenious formulation for the malaise that she observed among middle-class suburban housewives. She called it “the problem that has no name.”3 Except for a few articles by those rare women in American sociology—for example, Helen Hacker’s 1951 article “Women as a Minority Group”—the wholesale subordination of women was not on the radar of the male professoriate.4 Sexism had not yet entered the sociological lexicon.5 The fact that women were consigned to uphold the patriarchal family and the suburban dream was beyond the sociological imagination. It was an unquestioned fact of life.

Thanks to Daniel Horowitz’s assiduous biography—Betty Friedan and the Making of The Feminine Mystique—we now know that Friedan was no ordinary housewife who arrived at her epiphany through observation and introspection.6 Indeed, she was a seasoned political activist who had been schooled in radical politics at Smith College in the 1940s, a period of heightened political awareness as the nation mobilized for war. Furthermore, Friedan worked as a labor journalist for two decades and was steeped in the feminist thought and politics of the 1950s. It is true that, by the 1960s, Friedan had morphed into a suburban housewife. However, she brought an ideological lens that allowed her to see what was opaque to most others.

As Horowitz documents, among the books in Friedan’s library were Thorstein Veblen’s iconoclastic Theory of the Leisure Class (1899) and Simone de Beauvoir’s tour de force, The Second Sex (1963). In addition, she had a marked-up copy of Friedrich Engels’s 1884 essay “The Origin of the Family, Private Property and the State” in a compendium of works by Engels and Marx; it included the following passage:

We see already that the emancipation of women and their equality with men are impossible and must remain so as long as women are excluded from socially productive work and restricted to housework, which is private. The emancipation of women becomes possible only when women are enabled to take part in production on a large, social scale, and when domestic duties require their attention only to a minor degree.7

Alongside Engel’s words “when women are enabled to take part,” Friedan scrawled “along with men.”8 No ordinary housewife, she!

To be sure, Friedan grasped the malaise that she observed among suburban housewives, not to speak of her own discontents. But she also deployed her rhetorical skills as a journalist when she artfully wrote that this was a “problem that has no name.”

Race in the United States presents quite another dilemma: a problem that had been misdiagnosed and mislabeled—a problem, one might say, with the wrong name: race relations. Let us examine the origins of this deceptively innocent designation. In their book Racecraft, Karen E. Fields and Barbara J. Fields unpack the hidden and perverse meanings embedded in race relations:

Invented in the late-nineteenth-century heyday of the Jim Crow regime, the term “race relations” finessed the abrogation of democracy and the bloody vigilantism that enforced it.<9

In a cognate maneuver, the formula “race relations” drew a sentimental curtain of Old South symbols across the New South’s class relations and politics. While the curtain concealed the South’s cheap labor, Black and white, it also muffled the noise of anti-democratic struggles to build white supremacy.10

This is the surreptitious racecraft that conceals oppression in a fog of theoretical abstraction.

How is it that we apply such benign language—“race relations”—to such a malignant problem? It is rather like diagnosing a melanoma as a skin rash and prescribing a topical salve. Indeed, putting the wrong name on a problem is worse than having no name at all. In the latter instance, one is at least open to filling the conceptual void. In the first instance, however, words lead us down a blind alley. They divert us from the facets of the problem that should command our attention, and as the analogy to melanoma suggests, they lead to remedies that are ineffectual or worse.

Sociology can hardly be accused of turning a blind eye to the problem of race. However, as Franklin Frazier pointed out in 1947, the first two treatises on sociology in America were pro-slavery tracts!11 Since then, sociology has produced a vast canon of learned scholarship on issues of race and racism. One might ask, with Kierkegaard, whether this is a case of seeing and still not seeing. What is the conceptual lens that the sociologist brings to the study of race? Does it illuminate or does it obscure? And is this obfuscation ideologically innocent, or does it provide perverse justification for the prevailing racial order, which is one of racial hierarchy and domination? And what are we to say of a scholarly field of inquiry whose very name, race relations, is an artful obfuscation?12

What terminology would more accurately capture the essence of race in America? The right name, I submit, is “racial oppression.” This was the terminology used by Marxist writers in the 1930s, and it entered sociological parlance in the 1970s with the publication of Bob Blauner’s Racial Oppression in America.13

The ultimate fallacy of the race relations model, as Thomas Pettigrew asserted in 1964, was that it placed more importance on reducing prejudice among whites than on improving conditions among Blacks.14 Think about it: here was a praxis that ministered to the oppressor rather than the oppressed! In effect, Black aspirations for deliverance from poverty and racism were put on hold while whites underwent a therapeutic transformation. What clearer evidence that sociologists, against their intentions, have practiced a white social science?

More is involved here than a semantic quibble. I am taking issue not just with the term race relations but with the entire race relations paradigm. Other terms of discourse are equally problematic. In 1984 a psychologist at Brooklyn College, Barton Meyers, wrote an incisive paper entitled “Minority Group: An Ideological Formulation.” He argued, much as I do here, that the term minority group, coined by Louis Wirth in 1945, presents “a distorted understanding of reality,” whose effect is “to make obscure, especially to subordinate groups, the prevailing system of power and the intentions of the powerful.”15 Unfortunately, Meyers’s proposal to expunge minority group from the sociological lexicon and to substitute oppressed groups has fallen on deaf ears. Is it that we hear, but still do not hear?

On close examination, even the terms prejudice and discrimination are ideologically laden. In the Marxist paradigm, prejudice and discrimination are mere epiphenomena of systems of racial domination. Oliver Cox stated the matter with his characteristic acumen: “Race prejudice, then, constitutes an attitudinal justification necessary for an easy exploitation of some race. To put it in still another way, race prejudice is the social-attitudinal concomitant of the racial-exploitative practice of a ruling class in a capitalistic society.”16 In contrast, the tendency in social science has been to reify prejudice, to treat it as a problem unto itself, and to pretend that racism could be ameliorated by disabusing whites of the distorted beliefs that they harbor about Blacks.17

This set of assumptions has given rise to a plethora of redundant studies conducted over six decades, which chart the prevalence and distribution of prejudiced beliefs. We measure—with meticulous care—but we measure the wrong things, or more precisely, we measure the ephemeras of racism. Or we measure the right things—glaring inequalities between Blacks and whites in wealth, status, and power—but we attribute them to the wrong causes: to deficits in human capital or to aberrant or dysfunctional cultures that are said to perpetuate poverty from one generation to the next.

Discrimination suffers from the same problem. Instead of focusing on the historical and structural processes that reproduce racial inequalities from one generation to the next, discrimination is reduced to the level of discrete acts by discrete individuals. However, far more is involved than individual acts of discrimination, even when they constitute larger aggregates. We are dealing here with the systematic exclusion of an entire people from whole industries and job sectors for all of American history. To depict this as “discrimination” is to trivialize it, to elide its institutional basis, and to obscure its sources and magnitude. It would be far more apropos to deploy the term occupational apartheid, which captures the systemic character of the problem and provides a logic for affirmative action—which is targeted not at atomized individuals but at social institutions such as corporations, unions, and universities.

An earlier version of this chapter appeared as “Race Relations: The Problem with the Wrong Name” in New Politics, Winter 2001, © Stephen Steinberg.

5. According to Fred R. Shapiro, the term sexism was most likely coined on November 18, 1965, by Pauline M. Leet during a student-faculty forum at Franklin and Marshall College. Shapiro also contends that the first time the term sexism appeared in print was in Caroline Bird’s speech “On Being Born Female,” published November 15, 1968, in Vital Speeches of the Day (p. 6). In this speech, she asserted that “there is recognition abroad that we are in many ways a sexist country. Sexism is judging people by their sex when sex doesn’t matter. “Sexism,” Wikipedia, last edited May 17, 2021, https://en.wikipedia.org/wiki/Sexism.

6. Daniel Horowitz, Betty Friedan and the Making of The Feminine Mystique (Amherst: University of Massachusetts Press, 2000).

12. To state the obvious, the name per se is of little significance. It is the context that matters. In 1895, Frederick Douglass wrote with palpable ire in the New York Times: “They could call it some other name—it is fertile in names; it has been called ‘the peculiar institution,’ the ‘impediment,’ etc., and it will again turn up under some new and hateful guise to curse and destroy this nation.” It is rather the semiotics that are instantiated in the name, together with the hidden meanings and devious uses of that name, that are critical. The ultimate test is whether a name elucidates or whether, as in the case of race relations, it is a sinister obfuscation. “The Anti-Slavery Society: Exciting Debate and Final Action on Mr. Garrison’s Resolution of Dissolution,” New York Times, May 11, 1865, https://www.nytimescom/1865/05/11/ archives/the-antislavery-society-exciting-debate-and-final-action-on-mr.html.

13. Bob Blauner, Racial Oppression in America (New York: Harper & Row, 1972). Full disclosure: as a doctoral student at UC, Berkeley, I was a student of Bob’s, and he headed my dissertation committee. Some years later, I asked him via email where he got the word oppression. He answered with a shrug: “Well, I don’t know. Oppression was commonly used on the Left.” In an autobiographical essay, Bob divulged that as a youthful radical in Chicago in the 1950s, he was a member of the Communist Party, which did not shirk from calling oppression by its rightful name.

14. “I think one of the great fallacies we have had in the field of race relations for many, many decades has been to worry about attitudes rather than about conditions.” Thomas F. Pettigrew, “Transcript of the American Academy Conference on the Negro American. May 14–15, 1965,” in “The Negro American,” vol. 2, Daedalus 95, no. 1 (Winter 1966): 312.