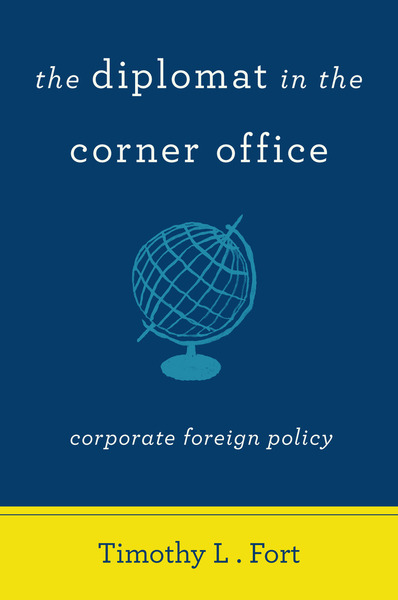 When I started to propose that ethical business behavior might make a contribution to sustainable peace in 1999, I was met with blank stares. Most people in academia, the NGO world, business, and government seemed to be at a loss of what to say, other than they didn’t get it. Those folks were the nicer ones. Others asked if I was active in the 1960s hippie movement—though I am a bit young for that—and though no one actually said it, I felt as if they might also wonder if I was a failed contestant for the Miss Universe contest; you know, dreamily hoping for world peace.

While I was floating this idea of businesses’ relevance for peace, I continued to pursue business ethics as my scholarly bread and butter. In writing a book for Oxford University Press at that time on what I called a mediating institutions approach to building ethical corporate culture, I had argued that business ethics theories (stakeholder, rights, justice, social contract, virtue, and naturalism) have their greatest impact if corporations are structured so that people work in sizes of groups that match their neurological capabilities. Research suggested that those group sizes were fairly small with rough breaking points around four to six, thirty, and 150. Each time one went above those group sizes, certain communal capabilities became harder to maintain. At 150, it was hard to really know the people one was working with. If one did not internalize the idea that there were consequences to one’s actions, then ethical behavior became harder to maintain. People had a greater chance of being ethical on a regular basis if their work entailed a high degree of face-to-face interactions and took place in settings where there was a sense of egalitarian voice; even if decisions were made hierarchically, it made a difference if all employees could speak up.

As I was finishing this book, I came across peace literature studies by anthropologists David Fabbro1 and Raymond Kelly.2 Put simply, they, in different ways, focused on the dynamics of human interaction in relatively peaceful or warless societies. In those societies, there was a good deal of face-to-face interaction and egalitarian decision making.3 Individuals had their own unique identity in the community; when a society grew large, any individual can be substituted for another, especially in the eyes of an enemy.4 In short, size matters, and so too does voice. One might therefore conclude—as I did—that we need to champion the businesses that are small and engaging, recognizing that the big multinationals and global businesses might be harmful to the cause of peace.

Fabbro’s and Kelly’s findings struck me as consistent with the proposals I was making for how to build ethical corporate cultures. When I looked around to see what else had been written about the bridge between business and peace, I was surprised that there wasn’t much I could find. Jane Nelson had just published The Business of Peace, which was a very helpful start.5 Virginia Haufler had written a book, A Public Role for the Private Sector, which also provided fundamentals to build on.6 Of course, the International Chamber of Commerce7 had long been established with an aim to serve as a “merchant of peace” akin to Rotary International.8 In post–World War II Europe, there were commitments that many institutions would contribute to peace.9 This was a start for considering the role business organizations might play in fostering peace, but, to the extent there was attention paid to issues of, well, money and peace, it occurred at a much more abstract level. Most sustained analysis pertained to large, more macroeconomic issues linking free trade and peace.

Talk of how macroeconomic trade benefit peace begged a question: Who would do the heavy lifting? Who would invest? The same holds true for the philosophical renditions of commerce and peace such as from Kant and Montesquieu. Who would create jobs? Who would profit? The answer seems clear: Business. So if there is evidence of a positive relationship between trade and peace, we should focus our attention on the agent that does the trading. What do they do? How do they act? Are there some actions that carry with them attributes of peace? Are there others that do the exact opposite? Moreover, what kinds of businesses most help in fostering peace? The small ones with high degrees of face-to-face interactions or the large ones that dominate global business and that draw the attention of macroeconomic analysis?

When my Michigan colleague Cindy Schipani and I decided to host a two-day conference on the idea of how business fosters peace in 2001, we had difficulty recruiting speakers—until September 11. Although our work was not on terrorism per se, many people wanted to do “something” to respond. Suddenly our speaking roster was full, and so were the seats in the conference room. Our work thus began in earnest: the role of business in world peace.

Curiously, empirical evidence does suggest something seemingly opposite to the Fabbro and Kelly position: that our global, faceless interconnected society is more peaceful than hunter-gatherer days. In this book, a core task for me is to show that both of these arguments are actually right and that what unites them is gentle commerce, a term used only in general terms to date but that can be constructively defined as ethical business.

Speaking of definitions, I must pause a moment to define peace. To date, I have been content with defining peace as the absence of bloodshed. That remains my primary intention. My argument has been that ethical practices steer us away from bloodshed. Excluding versions of Roman sundering of Carthage, the absence of bloodshed will incorporate justice. Others, for example Gandhi, spoke of peace as social justice and claimed that violence—for example poverty—could occur without bloodshed per se. Well, I’m not going to argue with Gandhi. So I support the notion of injustice—with or without bloodshed—as violent, but for purposes of this book, I am going to continue to primarily emphasize the connection to bloodshed itself. My view is that, though great progress has been made in this field over the past fifteen years, we have enough work to do to get this connection figured out before extending it to the larger questions of social justice.

That assertion does not mean it is monolithic. Businesses are themselves diverse, and they contribute to peace in different ways. Some do so intentionally because of the commitments of the leaders of the organization. Some do without any awareness that their ethical practices have a positive impact on peace building. Still others, as I will begin with Chapter 1 and end with in Chapter 9, do so as a conduct of smart strategic practice: Corporate Foreign Policy.

5. Jane Nelson, The Business of Peace: The Private Sector as a Partner in Conflict Prevention and Resolution (Cambridge, UK: Prince of Wales Business Leader Forum, 2000).