STANFORD
UNIVERSITY PRESS
The Craft of Creativity
Matthew A. Cronin and Jeffrey Loewenstein 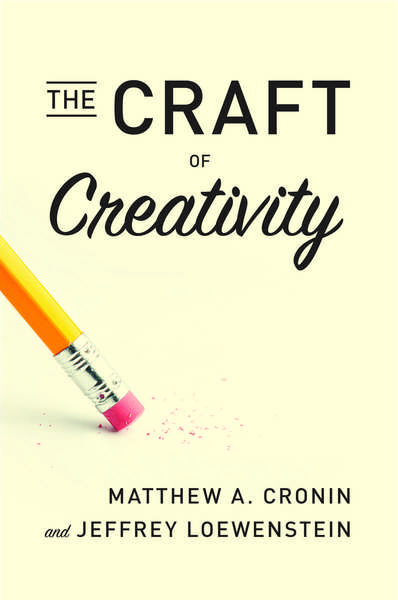 The Craft of Creativity
Matthew A. Cronin and Jeffrey Loewenstein

Faced with the choice between changing one’s mind and proving that there is no need to do so, almost everyone gets busy on the proof.

Creativity is touted by educators, scientists, and business leaders as important,1 but bemoaned as all too scarce.2 The lack of creativity is not for lack of trying. There are many calls to promote creativity and earnest attempts to support it in our schools and workplaces.3 It is why so much is written on how to help people to be more creative. Searching “how to be creative” will produce 812 books on Amazon and one million sites on Google. Yet for all this effort and knowledge, the results have not been encouraging. Most people still struggle to be creative or assume that they are not and cannot be creative. Creativity may even be on the decline.4

Creativity is personal for us. One of us played music professionally before becoming an academic. The other studied visual arts. Both of us realized we were even more interested in studying the creative process than in employing it in these areas. Both of us married people far more artistically talented than ourselves and whose creativity is a continuing source of joy. Creativity saved one of our spouse’s lives.

Heather has a lung disease, called interstitial pulmonary fibrosis, which is poorly understood despite killing as many people per year as breast cancer. The only known treatment is a lung transplant. Heather had been on a slow decline for about a year. She was in the hospital, about to be put on a ventilator, and she probably had about a month left to live.

When the call arrived that they had a matching lung, there was a catch. On paper, the lung had some uncertainties (the donor was a smoker, for instance), and so it had been rejected by twenty other hospitals. But the surgeons, Drs. Sanchez and Kon, didn’t just accept the results of the formula. Sanchez flew to Chicago to look at the lung, and he saw it differently; he said it was viable. Then there was another issue: the lung was not a classic match. There was a problem with mismatching antigens. Dr. Iacono, Heather’s pulmonologist, planned to use a new technique called the Toronto Protocol, whereby both Heather and the donated lung would have their antigens “reset” to zero before the operation. The protocol worked, the lung worked, and Heather has a new lease on life. The invention of the protocol and the willingness of the doctors to consider new possibilities, even ones others had rejected, ended up saving Heather’s life. Creativity matters.

We wrote this book in the hope that we could help people change their perspective on creativity and become more creative. And as you will see, changing perspectives is not “out with the old, in with the new” or “forget everything you think you know about creativity . . .” People have some excellent ideas about creativity already. But they also have some misconceptions, and there are a few notions that simply might be overlooked.

To provide a new perspective on creativity required understanding existing perspectives. A good deal of discussion and listening helped too. We thank Denise Rousseau for encouraging us from the beginning. We thank Roni Reiter-Palmon and Jing Zhou for their very thoughtful reviews. We thank Colin Fisher, Jonathan Cromwell, and Sarah Harvey for providing insights on framing the argument, and Laura Thomas for help with our initial draft. We thank an array of colleagues for discussions on these topics, most notably Jack Goncalo, Jill Perry-Smith, Chris Shalley, Bernard Nijstadt, Teresa Amabile, and Keith Sawyer. We are extraordinarily grateful to Jennifer Mueller for her perspective on our work as it developed and for thinking about the kind of bread we were trying to make. We thank Margo Beth Fleming, whose sage advice has kept us on track since she first told Matt, “You know, somewhere in all that rambling are some pretty good ideas.” Finally, we thank our families for their continued tolerance/support/nonviolence as we disappeared into the void of writing during these past few years.