STANFORD
UNIVERSITY PRESS
The Size of Others' Burdens
Barack Obama, Jane Addams, and the Politics of Helping Others
Erik Schneiderhan 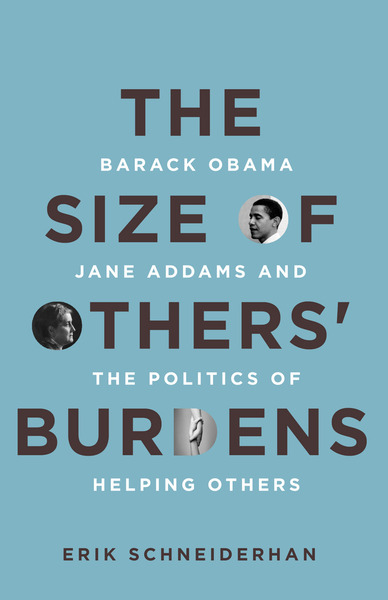 This chapter presents an overview of the book's main premise: that the struggle between promoting individual responsibility and helping others in the community has been a hallmark of American culture. It introduces the two main empirical subjects of the book—Jane Addams and Barack Obama—and paints in broad brushstrokes their shared successes and struggles as they tried to do community work in Chicago.

2 The Right to Be Heard
chapter abstract

This chapter looks at the early life of Jane Addams before she founded Hull-House. It shows how her cultivation of privilege, her extensive travel, and her college education all contributed to her constructing a social self that did not conform to traditional gender norms. The chapter also sets the stage in Chicago by developing a portrait of existing charity organizations and showing how Addams and her friend Ellen Gates Starr launched a new and different way of helping others at Hull-House.

This chapter starts with the opening of Hull-House in 1889 and goes on to illuminate some of the key successes and struggles of Jane Addams as she tried to help her neighbors in the Nineteenth Ward of Chicago. It shows how Addams's independent and creative work shifted in the early 1890s to include charity organization methods, a more hard-nosed approach to helping others.

This chapter begins in 1894, with Jane Addams struggling to meet the needs of the seemingly endless number of neighbors requiring her help. Hull-House did not have the capacity to address the needs of the city so Addams helped found the Chicago Bureau of Charities (CBC). Her work on behalf of the CBC is contrasted with her efforts at Hull-House, emphasizing her dilemmas as she tried to adjudicate between two very different approaches to helping others. The chapter also chronicles Addams's increasing involvement with Chicago elites, as she entered into politics and needed to raise funds to support her charitable work. It concludes with a brief summary of the three Addams chapters.

5 Wake Up! It's Morning in America
chapter abstract

This chapter looks at the early life of Barack Obama. It shows how his childhood in Indonesia and Hawaii, his elite education, and his extensive travel contributed to his constructing a social self and line of action that did not conform to traditional social expectations. The chapter illuminates Obama's struggles with the dilemma of making a difference in the world versus making a living. It concludes by tracing his trajectory from New York to Chicago, where he would begin his community organizing with the Developing Communities Project.

In this chapter, the Chicago community work of Barack Obama is presented. The chapter shows how his creativity and experimentalism helped the Developing Communities Project make a difference in people's lives. It also shows how Obama's efforts were stymied, illuminating his struggles to empower community members with limited resources. It concludes with Obama's decision to leave Chicago and attend Harvard Law School so that he might make a difference on a larger scale.

7 Balancing a Hard Head with a Big Heart
chapter abstract

This chapter spans several years in Obama's life—from his time at Harvard to his return to Chicago as a political organizer at Project Vote! and his experiences as a lawyer and University of Chicago lecturer. It shows his efforts to balance his own individual goals with his desire to make a difference in Chicago. And it shows how his new wife Michelle contributed to the development of connections to Chicago elites, connections that proved helpful as Obama decided to run for the Illinois State Senate. The chapter concludes with a brief summary of the main ideas of the three Obama chapters.

8 Mixing on the Thronged and Common Road
chapter abstract

This chapter begins with a précis, briefly highlighting some key points of the biographies of Addams and Obama after the time period examined in the book. The chapter then returns to the theme of the American's Dilemma, illustrating how Addams and Obama dealt with their everyday struggles to balance their individual and collective goals. The chapter concludes with a discussion of how the examples of Addams and Obama might inform our own efforts to move beyond our own social dilemmas and contribute to community growth.

The appendix, more academic in tone, discusses the primary and secondary sources for the data on Addams and Obama. It then moves on to a presentation of the main theory underpinning the book's analysis, including ideas from Sartre, Merton, Lynd, Dewey, and Sumner, to name but a few.