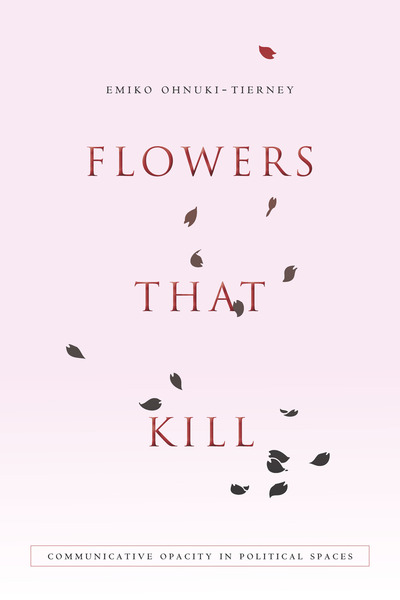 Opacity, Misrecognition, and Other Complexities of Symbolic Communication

Even Marxist student soldiers who were forced to become pilots for the special attack force (kamikaze) were utterly unaware that the single pink cherry blossom painted on the side of the airplane for their final flight represented, not the celebration of life, but their own life sacrificed for a country they deemed to have been corrupted by its imperial ambitions, militarism, capitalism, and egotism. When Hitler’s propaganda machinery foregrounded the Führer receiving roses from women and children, he was portrayed as the benevolent father to all Germans without a hint of the utterly destructive power he wielded. By leading people to their own deaths and those of countless others, these flowers did, after all, kill, albeit indirectly and in somewhat different ways.

The explanation for this phenomenon lies in our unawareness of communicative opacity, which can lead people to unknowingly cooperate in their own subjugation and/or march to their own destruction in war, a denouement that people realize when it is too late, as happened to the Japanese. Even in ordinary circumstances, communicative opacity plays an important yet often highly subtle role when marginalized social groups are not represented in a symbol of the collective self and yet are unaware of this, being co-opted by the symbolic meaning and power of the dominant group within society.1 This book represents my effort to seek possible factors that contribute to communicative opacity and to point out the urgency of considering communicative opacity an important political issue—including when people’s lives are on the line.

Communication is of fundamental importance not only for the survival of a social group but also for the daily interactions among social animals, especially humans. Communication is the bedrock of any society and is synonymous with culture (Hall ([1966] 1969; Leach 1976).

Although its difficulties and complexities have been a central and perennial interest of scholars of many disciplines, a major assumption has been that human communication is possible if only we try hard enough. A detailed discussion of Enlightenment rationality and political rationality is beyond the scope of this book, but let me choose just one representative scholar—Jürgen Habermas, who advocated “communicative rationality,” which enables “coordination” among individuals with different goals: “Language is a medium of communication that serves understanding, whereas actors, in coming to an understanding with one another so as to coordinate their actions, pursue their own particular aims” (Habermas 1984: 101). His communicative action takes place when “all participants harmonize their individual plans of action with one another and thus pursue their illocutionary aims without reservation” (Habermas 1984: 294, italics in the original). In his view, language and the illocutionary act, in particular, lead to “Reason and the Rationalization of Society”—the subtitle of volume one of The Theory of Communicative Action (1984). His model and those who follow political rationality in general do not leave room for communicative opacity.

Let me elaborate on the two examples presented at the beginning of this chapter: two historical developments that show how cherry blossoms and roses had undergone significant and yet imperceptible transformations under authoritarian regimes. Although cherry blossoms (Chapter One) stood for life, women’s reproductive power, agrarian productive power, and other sunny meanings, one of this flower’s symbolic meanings—pathos over the brevity of life—was transformed into a military dictum: “Thou shalt fall like beautiful cherry petals after a short life for the emperor-cum-Japan.” It became the Japanese state’s major trope of propaganda during its quest for imperial power, which began at the end of the nineteenth century.2 The motto had been intensively and extensively used during the Russo-Japanese War and the two Sino-Japanese wars, culminating in the Second World War, at the very end of which the tokkōtai (kamikaze operation) was instituted. None of the pilots was aware that a pink cherry blossom, painted on the side of each tokkōtai plane, represented their sacrificed life. The pilots were to fall, like beautiful cherry petals, in order to protect the beautiful land of cherry blossoms. Although falling petals had long been associated with death, it was not as sacrifice for the emperor-cum-Japan (Ohnuki-Tierney 2002a; 2006a).

Why did Japanese student soldiers fail to notice that the meaning of the flower had changed under the military government? They were cosmopolitan intellectuals who read widely in Latin, German, and French as well as Japanese and Chinese, and were liberals or even radicals (Ohnuki-Tierney 2002a; 2006a). This transformation was hardly recognized by anyone else as well—people at home, soldiers at the front, even scholars of liberal persuasion. Why?

A similar question may be posed about roses, which in many cultures in Europe, the Middle East, and elsewhere traditionally stood for interpersonal love (“Love is like a red red rose”) and later came to mean solidarity among workers, as expressed through the emblem of the Socialist International (“Bread and Roses”) (Chapter Two). During the authoritarian era in twentieth-century Europe, the flower became ubiquitous in propaganda photos of Lenin, Stalin, and Hitler, all of whom received roses from women and children. Each of these dictators sent countless people to their death. Did the citizens of the USSR and Germany realize how the rose had been co-opted, as it were, by dictators to aestheticize their subjugation of the people?

Although cherry blossoms and roses played significantly different roles, each flower in its specific cultural and political context helped create communicative opacity, which facilitated, subtly and indirectly, political oppression at home, aggression abroad, and the death of millions. They became, as it were, “flowers that kill.”

The basic question then is how people, including political leaders, articulate in their minds the meaning(s) of a symbol in a given social/political context. Are they unaware that they do not recognize the opacity of symbolic communication? What are the negative consequences of such unawareness for people involved in critical political spaces? Eric Wolf urged those who study symbols to ask “how ideologies become programs for the deployment of power” (Wolf 1999: 4) and compared the role of ideologies among the Kwakiutl, the Aztecs, and National Socialist Germany. I attempt to address this question by examining the power of important symbols as conveyers of ideology, and its limits.

With this aim, I begin this book with the political roles of quotidian symbols and identify the factors that facilitate communicative opacity. The examples I chose are deliberately not obvious political symbols, such as national flags, monuments, and the like. Instead, my focus is on quotidian objects, such as flowers, rice, and the monkey, which have been brought into political spaces, including deployment in geopolitical conflicts, without the public knowing of their changed role. They look too ordinary to be able to harness political power. Mona Ozouf ([1976] 1994: 232–33) has shown how French revolutionary symbolism, especially the official symbol of the Liberty Tree (arbre de la liberté), was derived from the maypole of the folk tradition in many parts of France. The Republican borrowings from popular festivals made revolutionary symbolism “less alien . . . to the popular sensibility.” As I have noted above, roses—a traditional symbol of interpersonal love—were deployed by the propaganda machinery of twentieth-century dictators, especially Stalin and Hitler. But, the flower is too quotidian to be threatening to people, who did not realize the profound change in its meaning and function.

1. For the most part, I use the term “symbol” even though this term covers “a great variety of apparently dissimilar modes of behavior” (Fernandez 1986: 30–31). The “symbols” in this book are not metaphors—a trope that singles out a similarity/analogy between an object and its referent whose denotative meanings do not belong to the same category (Basso 1981; Fernandez 1986; Ohnuki-Tierney 1990b, 1991a).

2. In political science, a technical distinction is made between the state, defined by certain attributes including sovereignty and territory, and the nation, consisting of people as a collectivity, although the two are usually used interchangeably (Young 2012: 32–43).