STANFORD
UNIVERSITY PRESS
The Prince of This World
Adam Kotsko 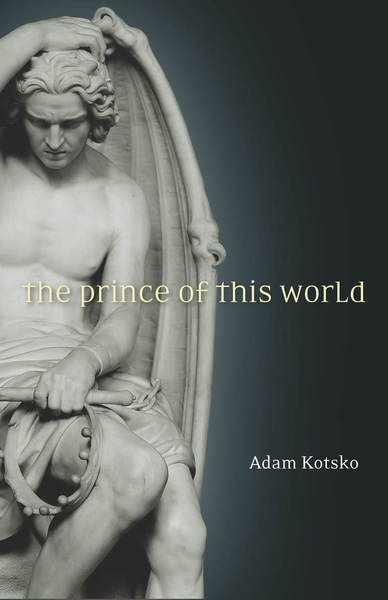 The Prince of This World
Adam Kotsko

Contents
Excerpt from the Introduction
Contents and Abstracts
Introduction: Why the Devil?
chapter abstract

The Introduction begins with the tortured discussions of moral accountability in the context of police shootings of unarmed black victims, arguing that there are similarly convoluted dynamics at work in medieval theological reflections on the devil. It traces this problematic back to the problem of evil, using the Book of Job as its primary point of reference while noting that the text is an outlier in the Hebrew biblical tradition. Where Job is focused on problems of individual suffering, most of the Hebrew Bible is more concerned with the problems of justice and political legitimacy that arise from Israel's unique relationship to God.

This chapter begins with God's rivalry with Pharaoh, who serves as the earliest model for the theological figure who will become the devil. It traces three major theological paradigms that attempt to vindicate the claim that Israel's God is the God of all the world in the face of the Jewish community's various political experiences under self-rule, in conditions of diaspora under tolerable rulers, and in situations of systematic persecution. The latter gives rise to the apocalyptic paradigm, which is where the figure of a cosmic rival to God first emerges as a theological symbol for an oppressive ruler—a figure that ultimately develops into the devil. Along the way, it connects the problem of evil with the concept of sovereignty, which has been so central to contemporary debates on political theology.

After reviewing the three paradigms, this chapter investigates the ways that Christianity takes up and transforms the apocalyptic paradigm in light of two key experiences: the crucifixion of God's chosen messiah and the rejection of that messiah by the Jewish mainstream. It traces the Christian tradition's growing tendency to de-emphasize the association between the devil and earthly rulers and to instead put forward a special connection, first between the devil and the Jews and subsequently between the devil and a wider range of religious opponents (heretics and pagans). This shift prepares the ground for mainstream Christianity's acceptance of imperial patronage under Constantine, intensifying the identification of the devil with marginalized groups. This reversal highlights the ambiguities of revolution, which is central to modern ideas of political legitimacy even as it always threatens to replace one oppressor with another.

This chapter starts with an exploration of the so-called ransom theory of redemption, according to which Christ must become incarnate and die as a way of setting us free from our bondage to the devil. It uses a late articulation of this narrative as a way of tracing the growing influence of monastic spirituality on Christian theology in the post-Constantine era. The ransom theory had viewed humanity as freely—if misguidedly—assenting to the devil's rule in a way that anticipates the modern concept of the social contract, a notion that is also relevant for the formation of new voluntary social groupings in the context of the monastic movement. It proceeds to argue that in monasticism, the devil becomes identified with the body and its demands, so the monks' ascetic disciplines are viewed as a way of conquering the devil.

4 The Fall of the Devil
chapter abstract

Within monotheism, the existence of the devil creates as many conceptual problems as he solves. He initially seems to relieve God of responsibility for evil, yet a consistent monotheism demands that the devil, too, must have been created by God. This chapter maps out the ways that these tensions come to a head in the vexed theological problem of the fall of the devil. What could have motivated the devil, who must have been created in an initially good state, to rebel against God? Here freedom emerges as the key concept to bridge this conceptual gap, allowing God to take responsibility for creating the devil while still blaming the devil for his own evil choices. Explicit connections are made with modern social contract theory and with Descartes's "evil demon."

This chapter looks at the devil's activities within the present world, particularly his relationship with marginal and oppressed groups, as well as the increasingly repressed and reviled demands of the body itself, to tempt and harass the faithful. It looks at theologians' attempts to account for the existence of such groups and their place in God's providential plan. Areas of focus include the problem of original sin, the notion of the katechon, and the demonization of Jews and witches. Ultimately, it argues that their justification of God's indirect use of evil for good anticipates the modern concept of the economy, which transmutes our selfish choices into social benefits, as well as foreshadows modern strategies of domination centered on racialization.

This chapter concludes the devil's life story with a tour of his ultimate destination: hell. It explores the meaning and justification of eternal damnation as well as its somewhat disturbing role as a spectacle for the blessed. In light of these connections, it attempts to recontextualize Dante's Inferno, particularly the common claim that the work is somehow proto-modern. It suggests that hell may be a part of the genealogy of the modern prison, with all the disciplinary forms it entails. It concludes by arguing that hell reveals the truth of the medieval theological system: the medieval God thrives on suffering, but there also remains something that is fundamentally beyond his control.

Conclusion: The Legacy of the Devil
chapter abstract

The Conclusion briefly treats the devil's overt legacy in early modernity, most notably in the tendency to read the devil as the hero of Milton's Paradise Lost and the centrality of Goethe's Faust to the development of modern thought. Yet it argues that the more decisive influence of the devil in modernity is not the literal figure itself but the conceptual problems that the devil brings together—freedom, punishment, and legitimacy. Viewed in this light, many of the most treasured values of modernity appear deeply questionable and even destructive, so the book closes with a call to rethink those values and find new ways of living with our devils.