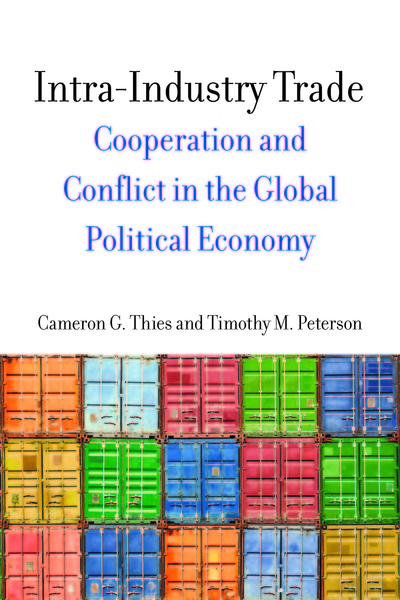 This chapter introduces the distinction between intra-industry and inter-industry trade, highlighting the qualitative shift in the nature of trade over the past several decades. It also introduces the research question that serves as motivation for the book: Why does trade appear to be such a powerful force for peace and cooperation today if it was not so historically? The chapter then discusses why the emergence of intra-industry trade could explain this change in the relationship between trade and international politics.

This chapter discusses the several challenges associated with measuring intra-industry trade. The argument is advanced in favor of using the bilateral, two-way trade of commodities at the Standard International Trade Classification (SITC) 4-digit level as a measure of intra-industry trade best suited to capture states' propensity for cooperation. The chapter concludes with a discussion of how intra-industry trade varies over time.

This chapter models preferential trade agreement (PTA) formation as a competitive process, demonstrating that the presence of bilateral intra-industry trade informs us as to which states will form PTAs. This follows because (1) firms benefit from larger markets and increased efficiency, potentially gaining relative to firms in states left out of the agreement; (2) intra-industry trade suggests similar productivity, such that firms in member states are less likely to be harmed by preferentially reduced trade barriers; and (3) strategic considerations are lessened as inter-industry specialization decreases.

4 Trade Composition and the World Trade Organization: The Effect of Intra-Industry Trade on the Dispute Settlement Procedure
chapter abstract

This chapter explores how the composition of trade influences the onset of disputes via the World Trade Organization. This dependent variable is unique in our analyses because the extent of existing trade is the most direct cause of disputes. We contend that higher trade volumes, all else equal, lead to more frequent WTO disputes because more trade suggests more opportunity for such disputes to arise. However, intra-industry trade can mitigate this relationship. The higher the proportion of intra-industry trade, the smaller the dispute-facilitating impact of higher trade volumes. In fact, if a large enough proportion of trade is composed of two-way exchange of similar commodities, then trade loses its dispute-facilitating impact.

5 Beyond Liberalization and Development: Intra-Industry Trade and the Onset of Militarized Disputes
chapter abstract

This chapter examines two conditions identified in previous work that are thought to promote pacific interstate relations: development, which suggests potential for gains from trade rather than conquest; and trade liberalization, which suggests weakness among interests potentially supporting conflict. The chapter notes that both of these explanations are incomplete, and suggests that a higher proportion of intra-industry trade uniquely promotes the emergence of similar interests and preferences, but not strategic vulnerability, among trade partners. The chapter suggests that mutual development is insufficient to promote peace in the absence of intra-industry trade, while intra-industry trade can promote peace even when levels of liberalization are low.

6 The Political Economy of International Affinity: How the Composition of Trade Influences Preference Similarity and Alliance
chapter abstract

The absence of militarized conflict is only a minimal indicator of peace. This chapter argues that intra-industry trade promotes the emergence of common interests among trade partners. However, the reverse case does not follow: more friendly states do not necessarily engage in more intra-industry trade, because restrictions on trade in strategic commodities are lower against friendly states. Accordingly, the chapter demonstrates that intra-industry trade is associated with converging foreign policy preference similarity over time, and with the onset and prevalence of alliances between trade partners.

This chapter summarizes the findings from the previous chapters, and discusses how patterns of intra-industry between the United States and various Asian states could help us to predict potential future relationships in the region.