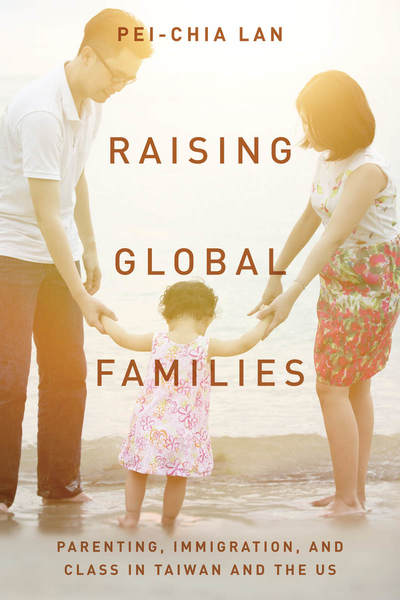 Raising Global Families
Parenting, Immigration, and Class in Taiwan and the US
Pei-Chia Lan

IN HER CONTROVERSIAL BEST SELLER Battle Hymn of the Tiger Mother, Amy Chua, who was born and raised in the United States, used the label “Chinese mother” to describe her style of strict parenting in contrast to softer “Western” parenting.1 Published in early 2011, soon after the financial crisis hit the American economy, Battle Hymn and the media sensation around it stirred both the American middle class’s shattered sense of economic security and increasing anxiety about China’s rise to global superpower. For instance, the Wall Street Journal published an abbreviated account of Chua’s book with the title “Why Chinese Mothers Are Superior.” A 2011 Time article asked, “Chua has set a whole nation of parents to wondering: Are we the losers she’s talking about?”2 The book’s cover delivered an unmistakable reference to Chinese culture, with the title presented to resemble a red-inked woodblock stamp with the Chinese characters for “tiger mom” at the center in a stylized archaic script.

Ironically, when marketing a translated version of the book in China, the publisher “Americanized” the title and cover.3 The Chinese title became The Ways I Mother in the US: Childrearing Advice from a Yale Law Professor, and the cover bore a picture of a smiling Chua standing before a US flag. Although Chua labeled herself a “Chinese mother,” she nevertheless became an “American mother” once the book traveled to China. The book was promoted as a parenting guide from an expert whose credibility was based on her teaching position at an Ivy League university. It was only one among many translated childrearing guides from Western experts filling bookstores in China and Taiwan, where anxious parents are hungry for the knowledge deemed essential for raising a modern child in a global world.

The figure of the “tiger mom” frequently appeared in my conversations with ethnic Chinese parents in Taiwan and the United States. Many recalled growing up with or having heard of a strict Chinese mother who placed high demands on her children. However, for many of them, “tiger mothering” was not a cultural heritage to embrace but an archaic tradition to discard. Take, for example, Janice Chan, a fortysomething Taiwanese mother living in Taipei who was a human resources manager and now is a dedicated full-time mother and an avid reader of parenting guides and magazines. With a passion for innovative ideas and educational tools, Janice is determined to jettison the traditions of rote learning and strict parenting. She considers Western education an ideal pathway for her children to attain holistic development and to secure a niche in the global creative economy.

Every other year, Janice provides her two sons with a slice of the American middle-class childhood by enrolling them in summer camp in California. They stay in the spacious two-story house of her cousin who works in Silicon Valley as an engineer. On a recent trip, Janice was surprised when the cousin’s wife asked her to bring over Taiwanese textbooks on math and physics. Yet this request was not unusual among Taiwanese immigrant parents to the United States. Just as Janice took her children to the United States for enrichment, many immigrant parents send their teenaged children back to Taiwan during the summer to improve their SAT scores and Chinese language skills. Feeling concerned about the depth of knowledge in American public education, as well as the rising opportunities in the region of Greater China, they use these trips to expose their American children to the culture and learning styles of their homeland.

In fact, most immigrant parents I interviewed in the United States tried to dissociate themselves from the controlling style of Amy Chua, but they could also relate to Chua’s emotional struggle. They saw the tiger mom as an immigrant’s tale—though Chua is US born—immigrant parents had little choice but to adopt a regimented parenting style in order to secure their children’s educational success in an environment of racial inequality. Nevertheless, they were keenly aware that Chua was no ordinary Chinese parent; her childrearing style was more indicative of class privilege than ethnic upbringing. Only a few immigrant Chinese families could afford the tutors, private lessons, and elite school that Chua’s daughters had access to.

Working-class Chinese immigrants, in particular, struggle with a shortage of economic and cultural resources in the new country. Mei-li Lin is a single mother and childcare worker living in a subsidized apartment on the outskirts of Boston’s Chinatown. After winning the green-card lottery, she immigrated with her only daughter to the United States to seek a brighter future and a happier childhood. Still, she is confused by the different cultural scripts of childrearing between Taiwan and the United States and frustrated by the reversal of the parent-child dynamics: “People here always ask kids how they feel. In Taiwan, you just tell your kids to listen to you. In the US, kids will correct your English and say, ‘Mom, you should listen to me!’”

When Mei-li brought her daughter back to Taiwan for a visit, her sister, a high school graduate like Mei-li, criticized her lack of parental authority. The sister, like many working-class parents in Taiwan, was mostly concerned about the looming dangers associated with drugs, gangs, and other social toxins in today’s teenage world. She warned Mei-li that the American parenting style would have dire consequences: “If you were raising kids this way in Taiwan, they would have beat up their parents! They have no respect and no discipline.” Mei-li resorts to the American rhetoric of freedom and justifies her hands-off approach to childrearing as a form of cultural assimilation: “We cannot control children in the US, and perhaps they would become more independent. This is the American way, isn’t it?”

An increasing number of families around the globe are living their lives physically or virtually across national borders. I use the term global family to echo what Mike Douglass has called “global householding,” which describes a dynamic process of forming and sustaining the households as a unit of social reproduction through global movements and transactions.4 Globalization provides these families with expanded childrearing resources and cultural horizons, but it also brings new challenges and intensified anxieties. This book examines how these mothers and fathers navigate transnational mobility and negotiate cultural boundaries, through what I call global security strategies, to cope with uncertainties and insecurities in the changing society and globalized world.

Raising Global Families is the first book to compare parents of the same age cohort in the country of origin and in the adopted country, while also examining class variations in their parenting practices. It includes four groups of ethnic Chinese parents in Taiwan and the United States: middle- and working-class Taiwanese, and middle- and working-class Chinese immigrants in the Boston area. This research design allows for interrogating the intersection of ethnic culture and social class. It illuminates that ethnic culture is neither static nor uniform, but rather is constantly shifting across borders. Each group faced context-specific predicaments and employed class-specific strategies of cultural negotiation. The cross-Pacific comparison also demonstrates how class-based parenthood configures differently across national contexts. Parents’ strategies of childrearing, which emerge from their class habitus and experience, take shape in reaction to public culture and local opportunity structure.

I propose the approach of transnational relational analysis to examine how parents develop strategic actions and emotional experiences of childrearing in relation to other parents. Well-resourced parents, who are inclined to “upscale” their perception of globalized risk, mobilize transnational resources and modify local norms to improve the security of their children. However, their global security strategies unwittingly magnify the insecurity of disadvantaged parents, who face increasing institutional pressure from the government and school to comply with the new cultural scripts of childrearing that privilege the middle-class nuclear family and Western-centric cultural capital.