STANFORD
UNIVERSITY PRESS
Uneasy Partnerships
China’s Engagement with Japan, the Koreas, and Russia in the Era of Reform
Edited by Thomas Fingar 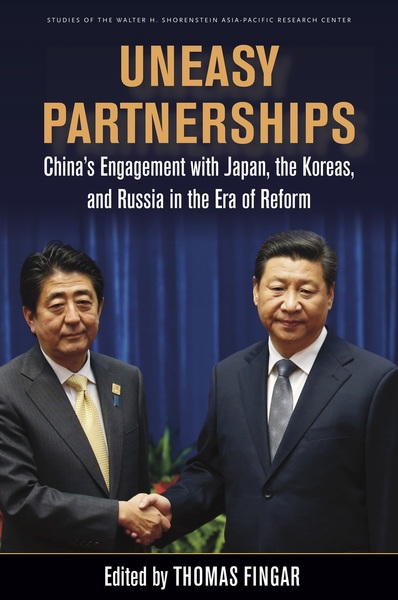 Uneasy Partnerships
China’s Engagement with Japan, the Koreas, and Russia in the Era of Reform
Edited by Thomas Fingar

This chapter describes the framework that helped focus the work of contributors and explains why this approach was utilized instead of approaches that attempt to prove or disprove general theories about China's foreign policy behavior or to explain the actions of China and specific partners using international relations theory. The framework required contributors to identify the most important factors shaping the perceptions, priorities, and policies of the country examined, and to pay particular attention to the relative importance of security and economic concerns and objectives.

This chapter examines the overarching objectives of China's "reform and opening" strategy in order to provide a baseline and context for understanding how China's engagement with the partners examined in other chapters reflects and derives from the strategy to achieve wealth, power, and influence through participation in the liberal international order led by the United States. It argues that China's highest priorities are security/stability and sustained economic development/modernization, and that Beijing's policies toward other countries are shaped by perceptions of what a given country can do to threaten or enhance China's security, and what that country can contribute to China's quest for rapid economic growth. Geography, history, relationships with key third countries, and developments in the international system, especially the end of the Cold War also play important roles, as do changes resulting from China's economic success.

This chapter examines many of the same factors and considerations as are examined from an American perspective in Chapter 2 but from a Chinese perspective. A principal difference is that this chapter emphasizes what the author considers to be unique features of China's approach, including a "win-win" approach that enables other states to benefit from China's rise and does not threaten the security or prosperity of others.

This chapter examines dilemmas resulting from the fact that China's quest for modernity can be assisted and accelerated by taking advantage of Japan's markets, technologies, capital, proximity, and incentives to assist and capitalize on China's eagerness to attract foreign investment, but a quest that is constrained by historical memories and the part hostility to Japan plays in the legitimizing mythology of the Chinese Communist Party. China "needs" Japan to achieve sustained growth, but party leaders must react forcefully to any real or perceived threat or affront from Japan. Public readiness to protest alleged Japanese affronts is a problem for Beijing because demonstrations can easily morph into protests against corruption, environmental degradation, or other downsides of China's developmental model and/or damage Japanese property in ways that could cause Japan to pull back form engagement with China.

5 Japan and the Rise of China: From Affinity to Alienation  Seiichiro Takagi
chapter abstract

This chapter traces the evolution of Japanese perceptions of and response to China's quest for sustained growth through engagement with the United States and its allies. Initially, and for many years, Japan was a willing contributor to China's "rise" and anticipated that economic development in China would be accompanied by political reform and amelioration of historical grievances. Japanese public opinion toward China soured markedly as China was perceived to act more aggressively toward Japan, and as anti-Japanese demonstrations in China rekindled concern about China's regional and global ambitions.

This chapter examines the evolution of China's perceptions of and policies toward North and South Korea and how they changed in response to the end of the Cold War, South Korea's emergence as an advanced industrial economy eager and able to assist and take advantage of China's quest for sustained growth, and North Korea's decreasing utility as a security buffer and limited inability to contribute to China's modernization. It traces the transformation of Chinese perceptions of North Korea from useful buffer to problematic source of instability hazardous to China's strategy of development, and the transformation of Beijing's perception of South Korea from adversary and ally of Washington to contributor to China's development and less certain partner of the United States.

This chapter describes South Korea's wariness about China's rise, eagerness to take advantage of economic opportunities resulting from China's development, and hope that China will contribute to management and alleviation of North Korean hostility. It describes the pragmatic, even utilitarian ways in which South Korea perceives and responds to developments in China while holding tight to its alliance with the United States. China and the ROK know one another well and interact with clear-eyed pragmatism and opportunism.

This chapter examines North Korean concerns and attempts to placate, balance, and benefit from its far larger neighbor. China's rapprochement with the United States triggered its nuclear weapons program and Beijing's "abandonment" of the North in order to pursue economic opportunities with the South prompted the DPRK to seek better relations with Washington, Tokyo, and Seoul, but those efforts failed, leaving it even more dependent on an increasingly unfriendly China.

This chapter focuses on Soviet/Russian perceptions of China's rise and describes how developments in both countries made it difficult or unimportant for either to devote much attention to the other until quite recently when they rediscovered useful economic and political complementarities. Neither wants to return to anything like their relationship in the 1950s but there may be some nostalgia or renewed interest in using relations with one another to counterbalance the United States.

This chapter identifies and explores a number of patterns and trends in China's engagement with key states in Northeast Asia, tracing several of them to the influence of third country developments, geography, and growing interdependence. It also compares findings and patterns that emerge from the chapters in this book to those of the companion volume on China's relations with South and Central Asia.